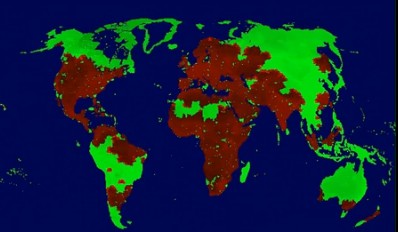 Ebola virus (EBOV, formerly designated Zaire ebolavirus) is the sole member of the Zaire Ebola virus species, and the most dangerous of the five known viruses within the genus Ebola virus. Four of the five known Ebola viruses cause a severe and often fatal hemorrhagic fever in humans and other primates, known as Ebola virus disease. The virus and its species were both originally named for Zaire (now the Democratic Republic of Congo), the country where it was first described,[1] and was at first suspected to be a new "strain" of the closely related Marburg virus; the virus (but not its species) was renamed to "Ebola virus" in 2010 to avoid confusion. The species is a virological taxon species included in the genus Ebolavirus, family Filoviridae (whose members are called Filovirus), order Mononegavirales.Its natural reservoir is believed to be bats, particularly fruit bats, and it is primarily transmitted between humans and from animals to humans, through body fluids.

This is your 1st line of defense-your immune system

You've got to keep your immune system in tip top shape.

Probiotics- it's been said that as much as 70% of your immune system exists in your gut. Yogurt-Yogurt-Yogurt

Exercise- do not just sit around waiting to die. Your body was made to WORK. Sweating is the healthiest thing you can do for your body.For realz. Try it, your body will thank you for it.

And maybe most importantly;

Sleep- you need to get your rest. Not enough sleep and stress will make you sick all by itself. You need your sleep. more/video at url