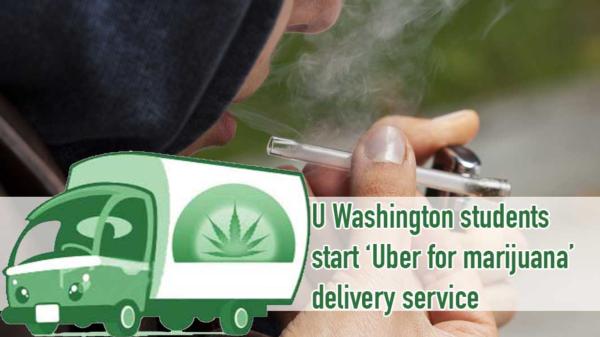 Two students at the University of Washington in Seattle are starting a business that they describe as "Uber for marijuana."

Josiah Tullis and Megh Vakharia are planning to launch a phone app called "Canary" in Seattle late next month.

"[A]n on-demand service that allows you to get cannabis delivered right to your doorstep."    Tweet This

"Canary is an on-demand service that allows you to get cannabis delivered right to your doorstep," Vakharia said in an interview with The Atlanta Journal-Constitution.

Medical-marijuana cardholders will be able to select different strains of pot from different medical dispensaries and then have their order delivered by a cardholding driver.

Users can buy in quantities ranging from a gram to an ounce.

The app also describes the sensations users can expect to experience with each strain. For example, it describes a variety called "White Widow" as "Happy. Euphoric. Uplifted."

The 20-year-olds told the Journal-Constitution that the service will work only with medical dispensaries providing to cardholding patients, and that they have policies in place to make sure.

"We check. We do some double verification that is required of medical-marijuana patients. They have to take a picture of the card and also present it upon arrival," Vakharia said.

There may be potential to expand, however, as recreational marijuana stores also open in Washington next month.

The students said they are already interviewing drivers from Uber and Lyft who are interested in working at Canary instead.

Those drivers will also have to undergo a background check.

The app already has a website, and the two entrepreneurs say they have attracted investors. According to the website, Canary will also expand to Denver at some point this year.

Canary also has a feature called "Munchies," where users can have the drivers bring along "popular food and drink items."

Doctors Slash COVID-19 Mortality Rate From 5.8% TO 3/10ths of One Percent With Telemedicine...

Pfizer, GSK & Others Quietly Hike Prices On 100s Of Drugs

FDA Should Restore Doctors Rights to Use Medicines That Work

AMA Lied How Many Died?

Protection or Pain Treatment: Choosing Between Your Gun and Medical Marijuana

Ivermectin "obliterates" transmission of Covid, but it's too cheap to be used