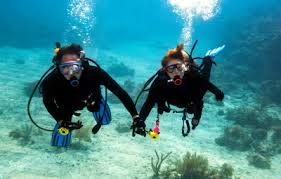 On a windless day on the west shore of Oahu, Hawaii, I strapped a pair of propellers to my legs, walked into the surf, and disappeared beneath the surface. Without a single kick, I was racing over the sand, cutting through the water at an Olympic pace. It felt more like flying than swimming. I struck a Superman pose and sailed into the abyss.

Designed for Special Forces divers, the Patriot3 Jetboots are unique among personal propulsion devices because they're hands-free and provide sea-creature-like agility. The two propellers, which hang from a waist harness and attach at the thigh, can send divers to nearly four knots. A lithium-ion battery worn at the small of the back could last up to four hours.

With the Jetboots—sort of a misnomer given how they're normally worn—I was able to swim circles around turtles, blend in with a school of fish, and scare the life out of two divers plodding through the shallows.