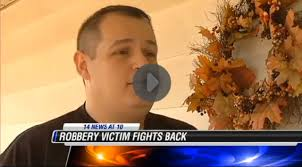 It happened about 10:30 on Wednesday night in the 1,000 block of Idlewild Drive.

22-year-old Paul Lukac and 24-year-old Justin Henschen are accused of breaking into John and Matt Fugate's home, but those two suspects had no idea what was waiting for them.

A threat on his family, turned the soft-spoken Matt Fugate, into an armed protector.

Matt was behind his bedroom door when out of nowhere, he says two men kicked in the front door of his Idlewild Drive home.

"I raced for the gun vault and had my gun in my hand in 5-seconds and then answered the door," says Matt.

His brother John's 911 call explains what happened next.

"I just had somebody kick down my door, and my brother has him at gunpoint on the floor," John tells the 911-operator.

Matt says the suspects were surprised and with no other options didn't move until police arrived. For two-long-minutes, Matt's pistol stayed locked on his targets loaded and at the ready.