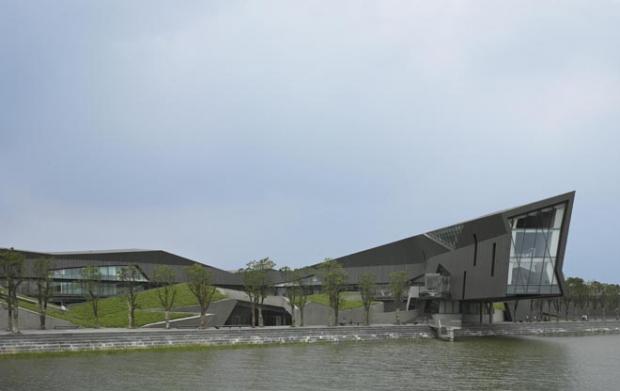 Check back Fridays for the continuing series, and feel free to make recommendations in the comments, by Twitter, or by e-mail. Giant Interactive Group Campus, Shanghai

It's only appropriate that the headquarters for Chinese gaming company Giant Interactive Group looks a little like something you'd find in a video game. But, in what must be a nod to making it somewhere people actually want to work, Morphosis Architects made the sculpted landscape that encompasses the building a little more green and — depending on your involvement in office politics — free of foes.

Completed in 2010, the building tries to use the landscape as a tool rather than a substrate. The angular building houses equally angular halls devoted to a range of functions, from swimming pool and tennis courts to a library and auditorium, as well as offices. A low green roof covers part of the structure, while a cantilevered wing extends over a man-made lake, and the entire structure is, like so many good role-playing games, intentionally labyrinthine. It encourages "chance encounters," notes Morphosis, though it doesn't say whether you'll run into any skulltulas.