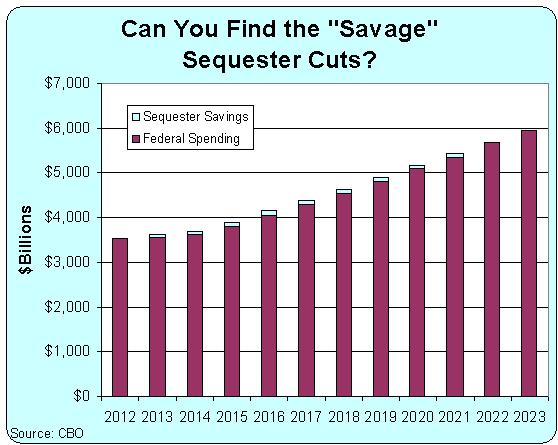 The "sequester" is nothing more than $880 billion dollars in "on paper" reductions from projected spending in the next decade. As Forbes Magazine recently pointed out, the sequester deal put forth by Obama and accepted by the Republican majority in the House is actually a $110 Billion spending INCREASE!

Silly us. We complain that the Republicans don’t work with the Democrats, and the President never compromises. Pay no attention to the whines and moans coming from Congressmen, Senators, Presidents and bureaucrats in Washington, D.C. These fat cats are smiling, chubby and Cheshire-style.

I had breakfast yesterday with several retired military people, like myself. Between the three of us, we came up with a handful of spending cuts the military could take right now that would save hundreds of millions of dollars, and we never even got to the antiquated weapons system lines, the unnecessary overseas bases, or the troubled and "too big to fail" F-35 fighter aircraft. By the way, the F-35 multi-role fighter aircraft is seven years behind schedule, 70% over budget, and is already the most expensive weapons system in US history.