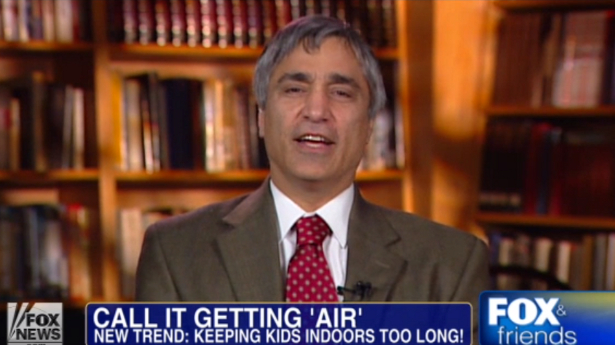 In a bizarre interview aired Friday morning, “Fox & Friends” apparently got punked by an author who declared that society absolutely has every reason to “destroy the imaginations of our children.”

It’s not quite clear why Anthony Esolen, author of the book “Ten Ways to Destroy the Imagination of Your Child,” responded the way he did, but it’s possible that he had an axe to grind with Fox News.

Asked about the premise of his book, Esolen flipped the conversation on its head. “First of all, we do want to destroy the imaginations of our children,” he said. “Otherwise our economy would collapse and people would stop buying things they don’t need and don’t really even enjoy.”

“You can’t let your kid be outside, because a single blade of grass out there is a more wondrous object than anything a kid will see on a screen in a month’s time of viewing television and video games,” Esolen continued. “So, absolutely, you’ve got to keep them indoors.”

He added that fairy tales are also not advisable because “they are based on what every culture really knows about human beings.

Boy, 12, who was accepted to MENSA at age three is set to make history as the --

Crafty dad outsmarts his daughter when she challenges him to pull a $5 bill from under...

Pregnant Women Who DON'T Get Vaccinated Have Healthier Babies Than Those Who Do...

Look who's talking too! After the baby that said 'hello', meet the incredible 10-week-ol

'There's no way!' Four-year-old boy sinks a hole in one on West Virginia golf course...

This girl has had enough of the mask wearing