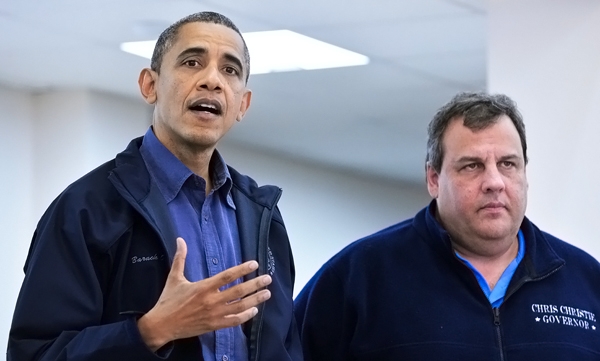 When I finally got back on the internet and was able to read the news again, I saw that Hurricane Sandy, in addition to being the rare storm to live up to its televised hype, had turned into the last-minute curveball plot twist that always seems to pop up in presidential races.

Some of those twists we hear about – like the sudden appearance of records from George W. Bush's 1976 drunk driving arrest in Maine – while others, like Dick Nixon's apparent secret negotiations with the Vietnamese in 1968, or the more-likely-mythical October Surprise deal involving Reagan and the Iran hostages in 1980, remain secrets until later on.

But this massive hurricane is apparently turning into a boon for Barack Obama on a number of fronts. One, it's allowed him to be seen all over television taking charge and acting presidential, and has even allowed him to brandish bipartisan credentials through the curiously intense bromance that he has developed this week with our own New Jersey Governor Chris Christie (a Romney supporter who, somewhat mysteriously, has gone out of his way to praise the president this week).

On a deeper level, though, the hurricane has seemingly made a powerful argument on Obama's behalf about the role of government in general.

The Shutdowns DESTROYED LIVES - Now The Government Wants To HIKE TAXES To Pay For It!

The Biggest Global Hoax In History

70% of Russians Have Savings, While 70% of Americans Live Paycheck to Paycheck

Trump administration to cut its financial contribution to NATO

The Secret History Of The Monopolization Of Welfare By The State