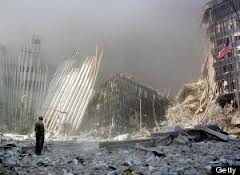 Our memories not only serve the purpose of learning to avoid danger from past experience, they serve as the glue that holds our sense of our fleeting lives together into a linear personal narrative. For all of us most memories are specific to our direct life experiences. There are some memories though transcending personal encounters and that directly affect us as well as society as a whole. The murder of John F. Kennedy is one such experience from my life that profoundly affected me and my generation, even though all I knew of the man was third hand at best. Closer in time but equally, if not more indelible is the image of the destruction wrought on the World Trade Center on 9/11/2001. I would guess that almost all Americans who were alive on that day know where they were and what they were doing. This past week we passed the eleventh anniversary of this horror and innumerable solemn observances occurred throughout the nation.

I can remember one phrase that began to be used over and over from that day onward and my rising anger at the implications of that phrase. “This Changes Everything”. I’ve not been able to determine what news-person or pundit first uttered those words, but afterwards the phrase reverberated incessantly. As that fateful day passed, what took shape in the meme those words created, was that the United States had undergone an experience that changed all the rules we had purportedly lived by in dealing with the world around us. In effect it was like saying “No more Mr. Nice Guy”. Whether or not our country ever lived by the ideals it purported to live by is another question entirely. My anger rose at the overuse of this meme because I’ve spent my life wanting my country to live by a higher standard in both national and international relations. I correctly saw this meme as an attempted usurpation of this tragedy towards turning our country away from our national ideals, such as they were. As the years passed since 9/11/2001, we have watched the erosion of these America Ideals. Two murderous wars have been waged. Hundreds of thousands have died, or been maimed. Our “national treasure” depleted, torture has become legalized and with the passage of the “Patriot Act” we have watched the demolition of our personal freedom. With this anniversary, two articles appeared nationally that call into question what was really behind 9/11 and also why there was a possibility of deterring it, which was ignored by the G.W. Bush Administration. I want to discuss both of these articles and then add my own thoughts on their real context.

Bob Graham was a Senator from Florida when 9/11 occurred. He was in fact the long time Chairman of the Senate Intelligence Committee, one of the most powerful and important positions in the U.S. Senate:

“Senator Graham opposed the War in Iraq for fear it would divert U.S. attention from the fight in Afghanistan. After reviewing information and meeting with military leaders in February 2002, he decided the war would be a “distraction” that would end poorly. He continues to oppose the Iraq War today.” http://en.wikipedia.org/wiki/Bob_Graham

The truth has been shown that Iraq was a war of poor choice and that it had nothing whatsoever to do with 9/11. It is also proven that Iraq had no “weapons of mass destruction” to justify our attack upon that country either. To my mind history has added luster to Senator Graham, as a man who was bravely willing to fight against the flow of “now this changes everything” propaganda and whom history has proven prescient. Therefore I took notice when I saw his byline on this Huffpost article: “Re-Open the 9/11 Investigation Now”

“The passage of time since September 11, 2001, has not diminished the distrust many of us feel surrounding the official story of how 9/11 happened and, more specifically, who financed and supported it. After eleven years, the time has come for the families of the victims, the survivors and all Americans to get the whole story behind 9/11.

Yet the story of who may have facilitated the 19 hijackers and the infrastructure that supported the attacks — a crucial element of the narrative — has not been told. The pieces we do have underscore how much more remains unknown.

Did the hijackers execute the plot alone, or did they have the support of forces other than the known leaders of al-Qaeda — a network even — that provided funds, assistance, and cover?

It is not merely a question of the need to complete the historical record. It is a matter of national security today.”