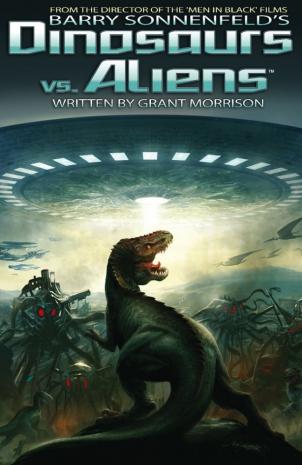 In other words, the cross-platform project — with comics, motion comics and a movie trilogy in the works — is the opposite of what its sensational title implies.

Sonnenfeld, whose kinetic cinematography for Coen brothers classics like Raising Arizona and Miller’s Crossing, executive production of cult TV standout The Tick and helming of oddball film franchises like The Addams Family and Men in Black have carved him a Hollywood niche matched in peculiarity by Tim Burton and only a few others, said Morrison’s done wonders working with the project’s giant reptiles.

“It is amazing how he has created specific characters, emotion and culture for the dinosaurs, without using dialog,” Sonnenfeld told Wired.

Rather than simply a Cretaceous showdown of spectacular conflict between two expendable entertainment standbys, Dinosaurs vs. Aliens serves as a philosophical treatise on manifest destiny, genocide and indigenous revolt. Instead of another popcorny blockbuster thrown onto Hollywood’s disposable entertainment pile, it’s a pointed critique of overreaching civilization at the edge of oblivion.