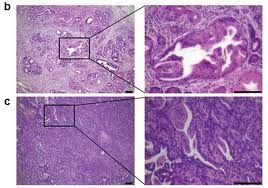 In a report that will appear in Nature and has received advance online publication, Massachusetts General Hospital (MGH) Cancer Center investigators describe finding increased expression of WNT2, a member of a known family of oncogenes, in CTCs from a mouse model of the deadly tumor and from human patients. The researchers were able to capture the CTCs - present in the bloodstream at extremely low levels - using a microchip-based device previously developed by members of the team.

"This proof of principle study is the first to show that, by studying both mouse and human pancreatic cancer cells captured with this device, we can dissect genes that are overexpressed in these cells and identify signaling pathways that allow them to survive in the bloodstream," says Daniel Haber, MD, PhD, director of the MGH Cancer Center and senior author of the Nature paper. "We also found that targeting a key step in these pathways can reduce metastatic potential, which is critically important for control of pancreatic cancer. This study would not have been possible without a way to isolate rare CTCs from both mouse models and human patients."

Using the second-generation version of the CTC-chip, developed in collaboration with the MGH Center for Engineering in Medicine, the researchers first captured CTCs from mice genetically programmed to develop pancreatic cancer, one of the most deadly tumors since it is rarely diagnosed before spreading.