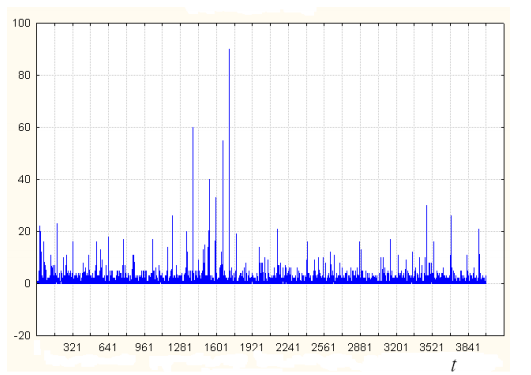 One of the more curious backwaters of biology is the study of biophotons: optical or ultraviolet photons emitted by living cells in a way that is distinct from conventional bioluminescence.

Nobody is quite sure how cells produce biophotons but the latest thinking is that various molecular processes can emit photons and that these are transported to the cell surface by energy carying excitons. A similar process carries the energy from photons across giant protein matrices during photosynthesis.

Whatever the mechanism, a growing number of biologists are convinced that when you switch off the lights, cells are bathed in the pale fireworks of a biophoton display.

This is not a bright phenomena. Biophotons are usually produced at the rate of dozens per second per square centimetre of cell culture.

That's not many. And it's why the notion that biophoton activity is actually a form of cellular communication is somewhat controversial.
Today, Sergey Mayburov at the Lebedev Institute of Physics in Moscow adds some extra evidence to the debate.

Mayburov has spent many hours in the dark watching fish eggs and recording the patterns of biophotons that these cells emit.

The question he aims to answer is whether the stream of photons has any discernible structure that would qualify it as a form of communication.