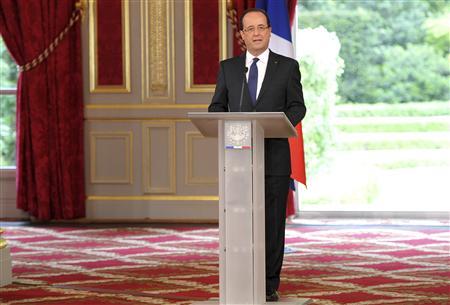 France's first Socialist leader in 17 years is little known outside France and will have a baptism of fire, flying first to Germany to challenge Berlin's focus on austerity then to the United States to meet Obama and attend G8 and NATO summits.

The talks in Camp David and Chicago will be the first encounter between world leaders and Hollande, a lifelong party official who has never held a ministerial post and whose affable and conciliatory manner will mark a change of style from the impulsive Nicolas Sarkozy.

"I don't see this robust internationalism or activism Sarkozy had manifested," said Stephen Flanagan at the Centre for Strategic and International Studies. "There is still a certain amount of French pride in this idea of still being a global actor. I doubt it will be as prominent under the Socialists."

The war in Afghanistan will top the talks agenda at the Group of Eight and NATO meetings in Camp David and Chicago.

"Without wanting to take risks, I believe it is time to withdraw our combat troops by the end of 2012," Hollande said on May 2, four days before he defeated conservative Nicolas Sarkozy. "I will announce this decision at the NATO summit."