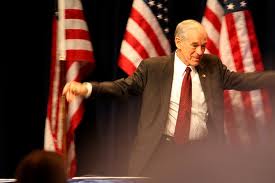 How the U.S. Media Has Had a Big Hand in Helping Ron Paul Win the Republican Nomination
A political editorial By Bryan Rusch
May 7th, 2012

It would seem absurd to think that the corporate free press in America is actually helping Ron Paul in his bid to become the Republican nominee doesn’t it? Well, not really. In fact, the news pundits and political analysts have actually done more harm than good to their latest “presumptive” nominee, “Willard (Mitt) Romney” than they have to the other last man standing in the Republican race, Ron Paul.

The cadre of established press corps in the United States may soon become the collective press corpse, unless they take drastic action to change course in the way they report the facts in this primary race. Of course it is now a damned if you do, damned if you don’t scenario for the establishment press. The question now is which course will they take?

So how has the U.S. media energized an irate, tireless, minority that is the Ron Paul phenomenon, or should I say, Revolution? First, they insult them, then belittle them, then try to ignore them, and then fight them, even if it means the establishment press’ peril of becoming completely irrelevant.

We'll skip over the 2008 nominating experience of the Ron Paul phenomenon and jump right into the pattern of the 2012 nominating experience. The pattern has been almost exactly the same, except this time Ron Paul is running further down the nominating path, and the old model of dismissing Ron Paul is yielding some very interesting, unintended consequences for the powers-that-be. It is my feeling this will result in a completely different outcome for the Republican nominee.

'Lock Up the Bidens,' Trump Says at Georgia Campaign Rally