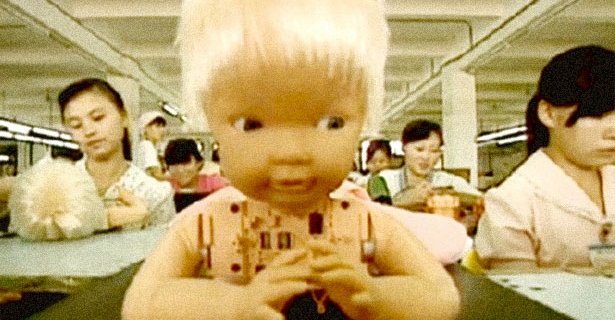 Some of the most radical and searching historical interrogations on film in the last few decades are being performed at the BBC, and chances are you’ve never seen them. The hair-raisingly provocative presence of producer/director Adam Curtis in the world’s most famous hyper-acculturated state media machine is nothing less than astonishing, particularly when you look at his work starting with 1992’s Pandora’s Box (and, since then, accumulating to about 24 solid hours of unnerving discourse). His new three-hour film, All Watched Over by Machines of Loving Grace, is typical Curtis, and you may find it randomly appearing in arthouses for short theatrical runs this year, and you can find it streaming online. You will not, however, see it on American television.
Curtis makes three- and four-hour documentary mini-series about modern history evolving from the early 20th century to today. They wear a calm and glossy BBC veneer, as though they are a mere set of history lessons slouching leftwardly, all about How We Got Here. But if you wade into Curtis’s worldview, there’s more at stake than that.

1 Comments in Response to Adam Curtis: Conspiracist of Long-Lost Facts

Of course, the motivating factor at work in every cybernetic imposition is top-down social control and economic power.

The fact that the gatekeepers of knowledge and information have pervasively and deliberately neglected the storylines and historical angles that Curtis limns is what drives his agenda. He’s a conspiracist of long-lost facts. For 20 years, Curtis has really told just one story, the story of the catastrophes brought about by the artificial and intellectualized imposition of power-mad order, laying bare the fallout created by everyone from Edward Bernays to Paul Wolfowitz. Power exerts pressure on the masses, at the behest of institutional gluttony or blind intellectual vanity or both, and shit comes out the other end. The power, meanwhile, persists.

In 1787, the Constitution proposed a federalist system - a system with powers distributed among the people, the states, and the not-as-yet-ratified federal government.

That Bill of Rights included the tenth amendment which reads as follows:

The powers not delegated to the United States by the Constitution, nor prohibited by it to the States, are reserved to the States respectively, or to the people.

It's bad enough that the 10th amendment is known as the States' Rights amendment.  It's actually a people-power amendment.

As I read Article IV Section 4's guarantee of a Republican form of government, I infer recognition of State sovereignty there.  With that, I also read a promise to observe the distribution of powers delineated in the 10th amendment, somewhat affirming Hamilton's assertion that adequate guarantees were included in the original 7 articles.  Even so, the insistence of prospective ratifiers upon more explicit language "to prevent misconstruction of powers" was well advised.

According to this article, Curtis focusses on the 20th century.  Power de-centralized to the extent it was in the late 18th century by the Constitution may have been something entirely new at that time.  Be that as it may, and however well or poorly it may have been observed at the outset, way too much power is centralized in Washington today, and they seem bent on getting that transferred to a larger central world body.

Absent a Constitutional amendment, this really shouldn't be undertaken by government in this country.