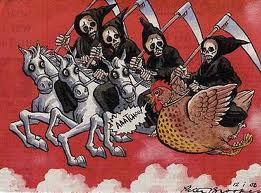 The experiments, which involved mutating the virus a total of 5 times, made the strain highly contagious between ferrets — the very animal model used to study human flu infection.

Of course many scientists are now warning that if such research was made public it could result in the construction of deadly bioweapons.

Making the virus highly contagious could result in widespread infection. The H5N1 virus has been infecting birds and other animals in recent years, though it has also infected around 500 people.

The reason that it has not become an epidemic is due to the fact that affected humans are usually not very contagious. Therefore, altering the virus to become highly contagious is quite possibly the deadliest tweak which could be done.

It seems that these scientists are just asking for the new weaponized bird flu virus to infect the public.

Dr. Thomas Inglesby, a bioterrorism expert and director of the Center for Biosecurity of the University of Pittsburgh Medical Center, notes that it is simply a bad idea for scientists to militarize bird flu, let alone publish the results:

‘It’s just a bad idea for scientists to turn a lethal virus into a lethal and highly contagious virus. And it’s a second bad idea for them to publish how they did it so others can copy it,’ says Inglesby.