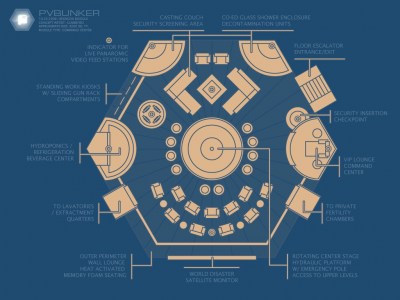 LOS ANGELES (CBS) — A San Fernando Valley adult entertainment studio began construction this month on what it calls a “post-apocalyptic” underground bunker in anticipation of a global catastrophe rumored to take place in late 2012.

A spokesman for Van Nuys-based Pink Visual said the bunker will be “far more than a mere bomb shelter or subterranean survivalist enclave” with amenities such as multiple fully-stocked bars, an enormous performing stage and a sophisticated content production studio.

“Our goal is nothing less than to survive the apocalypse to come in comfort and luxury,” said Pink Visual spokesman Quentin Boyer, “whether that catastrophe takes the form of fireballs flung earthward by an all-seeing deity, extended torrential rainfall, Biblical rapture, an earthquake-driven mega-tsunami, radioactive flesh-eating zombies, or some combination of the above.”

The studio’s website will also be maintained and updated throughout any potential disaster “even if those websites are only available on the bunker’s self-contained local network by that time,” Boyer added.

He declined to give the exact location of the bunker over “security concerns”.