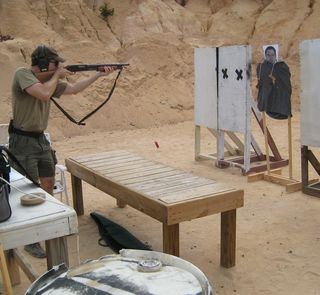 In my area of operations, home invasion is gaining in popularity as a tactic used by criminals. Apparently, cold burglaries with very precise information are preferred, but if that won’t work home invasion is considered as a perfectly acceptable alternative.

Recently, I started looking for more information on countering this specific tactic. Most of what I found was well-meaning but impractical advice or products. There was, however, some good along with the bad that I thought was worth passing on.

Types of home invasion
We typically think about home invasions as starting with a kicked-in door. That is not necessarily the case. Home invasions can be subdivided by their means of gaining entry: force, deception, stealth, garage, and carjacking. Force is what we commonly think of when we think of home invasions: a kick to the door knob. Deception means a ruse is used to get an occupant of the house to willingly open the door. Stealth means picking or “bumping” the lock, or entering though an unlocked door. Garage means gaining entry through the open garage door. And finally, there have been cases where home invasion victims were carjacked before being forced to drive to their own homes.

By thinking about home invasions in this light, we can better prepare our defenses against them. I also found some countermeasures that were new to me:

The surprise doorstop
While you may have resolved to never open your locked house door for a stranger if there is any doubt about their intentions, never is a long time, and not every occupant of the home (your spouse?) may have bought into that. The surprise doorstop is some kind of device attached to the floor behind the door that allows the door to be opened a few inches while preventing someone from opening it further and entering through it. Unlike a door chain it is not apparent to the criminal until the criminal tries to force the door open further, showing his true intentions, and initiating the rest of your countermeasures.

The fatal funnel
Most readers will probably be familiar with the “safe room” concept, wherein one of the rooms in the house is hardened and equipped to act as the keep of your castle. Typically, a solid reinforced door is suggested for this purpose. Instead, a strengthened matte glass door could be used. If the home invaders try to force it, it would provide additional physical evidence that they were not satisfied with the valuables in the portion of your house already under their control, but wanted YOU and your family. At the same time, it would position the (backlit) home invaders in the kill zone of an ambush with a well-protected and well-armed defender on the inside of the door and a bullet trap in or on the wall facing the door on the outside.

NO PRIVACY, NO PROPERTY: THE WORLD IN 2030 ACCORDING TO THE WEF