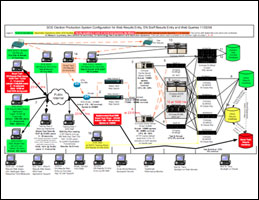 A new filing in the King Lincoln Bronzeville v. Blackwell case includes a copy of the Ohio Secretary of State election production system configuration that was in use in Ohio's 2004 presidential election when there was a sudden and unexpected shift in votes for George W. Bush.
The filing also includes the revealing deposition of the late Michael Connell. Connell served as the IT guru for the Bush family and Karl Rove. Connell ran the private IT firm GovTech that created the controversial system that transferred Ohio's vote count late on election night 2004 to a partisan Republican server site in Chattanooga, Tennessee owned by SmarTech. That is when the vote shift happened, not predicted by the exit polls, that led to Bush's unexpected victory. Connell died a month and a half after giving this deposition in a suspicious small plane crash.


Cliff Arnebeck, lead attorney in the King Lincoln case, exchanged emails with IT security expert Stephen Spoonamore. Arnebeck asked Spoonamore whether or not SmarTech had the capability to "input data" and thus alter the results of Ohio's 2004 election. Spoonamore responded: "Yes. They would have had data input capacities. The system might have been set up to log which source generated the data but probably did not."

Spoonamore explained that "they [SmarTech] have full access and could change things when and if they want."

A "man in the middle" is a deliberate computer hacking setup, which allows a third party to sit in between computer transmissions and illegally alter the data. A mirror site, by contrast, is designed as a backup site in case the main computer configuration fails.

Spoonamore claims that he confronted then-Secretary of State Blackwell at a secretary of state IT conference in Boston where he was giving a seminar in data security. "Blackwell freaked and refused to speak to me when I confronted him about it long before I met you," he wrote to Arnebeck.