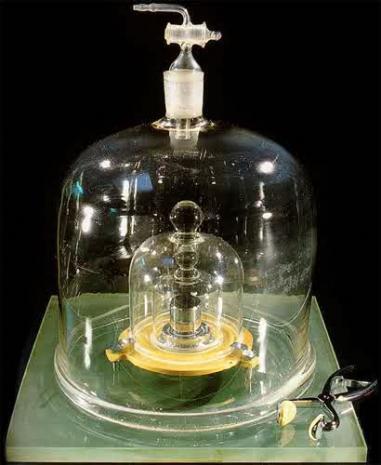 TO BEGIN, consider one of the most important measures of property, the kilogram. It’s a measure of mass or, for non-scientific purposes, weight. According to the papers last week, a global scramble is under way to define this most basic unit after it was discovered that the standard kilogram—a cylinder of platinum and iridium that is maintained by the International Bureau of Weights and Measures—has been losing mass.

You may think that this is impossible. Of all the elements, iridium is the most resistant to corrosion, and the cylinder is kept in a facility at Sevres, France, where it is under three glass domes accessible by three separate keys. The cylinder itself is more than 130 years old and is what the New York Times calls the “only remaining international standard in the metric system that is still a man-made object.” The new urgency to redefine the kilogram comes from the fact that its changing mass “defeats,” as the Times put it, “its only purpose: constancy.”

The question I invite you to consider for a moment is what would happen if we just let the kilogram float? This is a question that was posed in an editorial last week in the New York Sun. After all, the editorial said, we let the dollar float. The creation of dollars, and the status of the dollar as legal tender, is a matter of fiat. Its value is adjusted by the mandarins at the Federal Reserve, depending on variables they only sometimes share with the rest of the world. This would have floored the Framers of our Constitution, who granted Congress the power to coin money and regulate its value in the same sentence in which they gave it the power to fix the standard of weights and measures—like, say, the aforementioned kilogram.

Now, the record is clear in respect of how America’s founders viewed money.