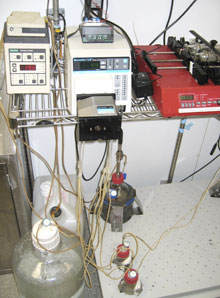 By exploiting the rapid replicating power of viruses, researchers were able to make biological molecules in the laboratory evolve much more rapidly than they can with existing approaches. Their new method, called phage-assisted continuous evolution (PACE), could be used to accelerate the development of therapeutic proteins, such as new cancer drugs, or to tackle unsolved questions about how evolution works.

Most traditional pharmaceutical agents are small molecules, but a number of promising new therapies are based on macromolecules, such as proteins. So-called "directed evolution" gives scientists a way to adapt a naturally occurring macromolecule to perform a specific therapeutically useful function, such as bind to a cancer-linked protein.

"For some applications, the speed of conventional protein evolution is a bottleneck," says David Liu, a professor of chemistry and chemical biology at Harvard University and senior author of a paper describing the new technique in Nature. "Efforts to create proteins with tailor-made properties will be maximally useful if methods to create them can operate on a truly practical timescale."

To streamline this undertaking, Liu and then-graduate students Kevin Esvelt and Jacob Carlson harnessed the life cycle of the M13 bacteriophage, a virus that infects E. coli. In the traditional method of directed evolution, scientists use an error-prone DNA copying method to create a library of genes encoding proteins with slightly different functions. With PACE, viruses carrying a gene for the target protein automatically generate such a library when they replicate inside E. coli cells, which have been modified to increase the viruses' mutation rate.