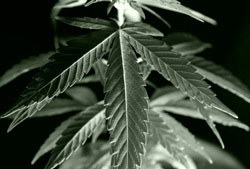 Five chemicals used to make fake weed, referred to as K2 and spice, just got an emergency designation by the Drug Enforcement Administration (DEA), making possession and sale of the substances or products containing them illegal in the United States.

The chemicals — called JWH-018, JWH-073, JWH-200, CP-47,497 and cannabicyclohexanol — are considered Schedule 1 under the Controlled Substances Act, a class that also includes heroin and the substances in ecstasy.

The drug is already outlawed in many European countries, at least 18 U.S. states and all branches of the U.S. military, according to the American Psychiatric Association.

"This emergency action was necessary to prevent an imminent threat to public health and safety," according to a DEA statement. The temporary scheduling will remain in place for at least a year while the DEA and U.S. Department of Health and Human Services study whether the chemicals should be permanently controlled.