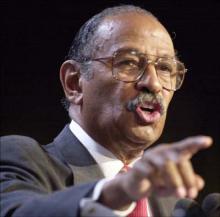 John Conyers III, 20, told police two Apple MacBooks, valued at $1,100 apiece, and more than $27,000 worth of concert tickets to the Fillmore were stolen out of a burgundy 2010 Cadillac Escalade registered to the 14th Congressional District.

The police report says the vehilce was parked at Brush Street and Congress around 11:30 p.m. on Nov. 24. When Conyers returned around 12:30 a.m., he noticed scratches on the side door and items scattered throughout the interior.

Shaykhet says the incident brings into question why the son of a congressman was driving a registered government vehicle.

"I don't know of a single person in congress in the 16 years I was there who had to put vehicle titles in the name of the government," former U.S. Rep. Joe Knollenberg tells FOX 2.

According to the U.S. General Services Administration Web site , if an employee allows an unauthorized person to use a government vehicle, that employee could be suspended or fired.

"I would tell you that they better use this (vehicle) just for the purpose of what they had been required to do," said Knollenberg. "Not to get into the hands of a relative or a friend or whatever."

Currently, there is no word on why John Conyers III was driving the vehicle. A spokesperson for the congressman's office tells FOX 2 she will get back to us on the allegations.

FOX 2 is also working to get details on what the concert tickets were for and if the stolen laptops had any sensitive government information.

His wife, Monica, is serving a 37-month federal prison sentence for corruption after pleading guilty last year to a bribery scheme involving her vote on the Detroit City Council in favor of a sludge-hauling contract.

The Insanity of the PCR Testing Saga

The Deadly Precedent of the Waco Whitewash

Teachers Compile List Of Parents Who Question Racial Curriculum, Plot War On Them