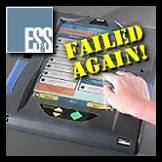 Aaand the touch-screen voting machines continue to flip votes during the early voting period. Right on schedule. Just as always. But, for the second time this week we have the unusual occurrence of votes reportedly flipping away from the GOP.

Yesterday our report was of a touch-screen in Dallas, TX, caught on video flipping an attempted vote for Republican Gov. Rick Perry to straight-ticket Green Party selections in Dallas, TX.

Today's report, where the local election official is also misleading voters by downplaying the incident, comes from the same type of 100% unverifiable ES&S iVotronic touch-screen voting machine, but it took place in Craven County, NC, according to P. Christine Smith of the Sun Journal...

A Craven County voter says he had a near miss at the polls on Thursday when an electronic voting machine completed his straight-party ticket for the opposite of what he intended.

Sam Laughinghouse of New Bern said he pushed the button to vote Republican in all races, but the voting machine screen displayed a ballot with all Democrats checked. He cleared the screen and tried again with the same result, he said. Then he asked for and received help from election staff.

"They pushed it twice and the same thing happened," Laughinghouse said. "That was four times in a row. The fifth time they pushed it and the Republicans came up and I voted."
..

"Something is not right here," [Craven County GOP Chair Chuck] Tyson told the Sun Journal. He said he "got two or three calls" from people describing the same problem while they were voting.
Read Full Story

It was reported Touch-Screens in Nevada  Flipped Straight-Party Votes from GOP to Democrats. Investigations should be made now to ensure organized crime is  helping some candidates.

Mail In Voting BACKFIRES On Democrats, Thousands Of Ballots From Young And Minority Voters REJECTED