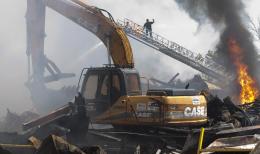 A fire that destroyed nearly all Harris County's electronic voting machines Friday has election officials scrambling to re-equip the county for an election in which early voting starts in just 51 days.

Even before the pre-dawn fire was out, County Clerk Beverly Kaufman pledged to hold a "timely election" on Nov. 2 but suggested the county may have to run fewer than its planned 739 Election Day polling stations if it cannot find enough machines.

Because she does not know how many machines will be available for each polling location, Kaufman started appealing almost immediately to voters to cast their ballots early to help avoid long lines on Election Day.

Harris County, with 1.9 million registered voters who account for nearly 15 percent of the state's electorate, must start from scratch to rebuild an elections infrastructure just over two months before a gubernatorial election.

The fire destroyed 10,000 pieces of equipment, including voting machines and devices called judge's booth controllers that dispense four-digit access codes to voters and serve as mobile ballot boxes to tabulate the count at the end of Election Day.

The three-alarm fire started about 4:15 a.m. at the 27,800-square-foot warehouse in the 600 block of Canino in north Houston that houses the county's voting equipment.

Houston Fire Department spokesman Patrick Trahan said arson investigators have not yet determined the cause of the blaze. No injuries were reported.

The flames lit up the sky for miles and could be seen from the Hardy Toll Road near Little York.

Kaufman estimated that the fire destroyed $30 million worth of voting equipment; the destroyed warehouse represents an additional loss of roughly $10 million.

Harris County Commissioners Court has scheduled an emergency meeting for Monday "for the purchase of taking action including authorizing purchases and leases in response to an urgent public necessity," in connection with the fire, according to the notice of the meeting.

Kaufman said she hopes to cobble together a collection of replacement machines through loans from other counties and replacement equipment from Hart InterCivic, from which the county bought its eSlate machines in 2002.

"Because I don't expect to have 10,000 pieces to work with, no matter what we do, I'm sure that we're going to be putting on a full-court press urging people to vote early," Kaufman said.

The trend toward early voting may help stave off Election Day traffic jams at the polls. In the 2008 presidential election, 63 percent of Harris County voters cast their ballots at early polling stations or by mail. In 2000, only 26 percent did so.

Hart InterCivic spokesman Marcus MacNeill said he does not know how many machines it has in its inventory or how long it will take to program new machines for Harris County elections.

MacNeill said the company's eSlate machines are in use in 112 counties and cities in the state but that he would not put out a call for loaner machines until Kaufman comes up with a plan.

Similarly, the secretary of state's office has offered to put out a request for equipment to county elections officials statewide, but officials will wait until next week when it has confirmation from Kaufman of what Harris County needs.

"I doubt they will have anywhere near enough voting machines for Election Day," said Dan Wallach, a Rice University associate professor who directs a center on electronic voting.

The county used about 4,300 voting machines in the last gubernatorial election. Assuming they cannot replace that many by election day, Wallach explained, the county faces difficult choices about how to proceed.

It can collapse the number of polling places, but that would require a huge education effort to let voters know where to report on Election Day, he said.

It also would bring protests from Democrats.

"The important thing here is that the Republicans who control county government and all election administration functions do not reduce the number of polling sites or do anything that would make it harder or less convenient for Harris County voters to participate in this critical election," said Anthony Gutierrez, deputy executive director of the Texas Democratic Party.

That would present an entirely new set of challenges, Wallach said, including acquiring voting booths and ballot boxes, printing ballots in several languages and securing the ballots.

Wallach also suggested that perhaps Kaufman should not spend $25 million or more in insurance money during her final months in office but wait for her successor to determine how to proceed on a possible next generation of voting machines.

It's Over: Trump Promises "Orderly Transition" On Jan. 20 After Biden Win Certified