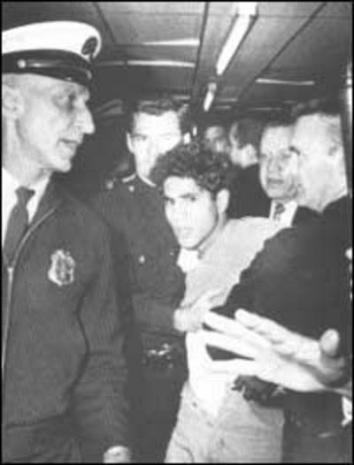 Sirhan Sirhan was the alleged assassin, convicted, and serving a life sentence at (no pun intended) Pleasant Valley State Prison, CA, despite convincing evidence of his innocence.

In his October 17, 2008 article "The Assassinations of the 1960s as 'Deep Events,' " Peter Dale Scott discussed the killings of both Kennedy brothers and Martin Luther King, saying:

"The more that I look at these deep events comparatively, ranging over the past five decades, the more similarities I see between them, and the more I understand them in the light of each other."

With respect to both Kennedys and King, official accounts obscured the events, suppressed key facts, enough to question the guilt of the alleged suspects, concealing the real culprits and why men of this stature were assassinated – what Scott called "some continuing and hostile force within our society..."

In his June 13, 2010 article titled, "JFK and RFK: The Plots that Killed Them, The Patsies that Didn't," James Fetzer debunked the official accounts, saying:

multiple shots targeted him, more "than could have come from Sirhan Sirhan's gun" that was also the wrong caliber; "RFK was shot behind the right ear from about 1.5 inches, but Sirhan was never that close and always in front of him;" the coroner and LAPD reports were contradictory; LAPD "engaged in massive destruction of evidence from the pantry of the hotel because 'it would not fit into a card file,' " as part of an official cover-up to blame Sirhan for a state-sponsored assassination, evidence suggesting CIA involvement in both Kennedy brothers and MLK killings; Sirhan's gun was a ".22 caliber, eight-round revolver (serial number H-53725);" he "emptied his weapon from a location in front of Bobby Kennedy;" Dr. Thomas Hoguchi's autopsy "showed RFK was hit by four bullets, all of which were fired from behind at upward angles; five others were wounded by separate shots;" as many as 13 shots were fired; Dr. Noguchi's autopsy "did not point to Sirhan as the killer;" an eyewitness, DeWayne Wofler, "testified that the bullets fired at RFK had come from an entirely different gun," not Sirhan's; a security guard, Eugene Cesar, standing right behind RFK, had a drawn gun of the same caliber as the murder weapon; it was never examined nor was he charged; and "a woman in a polka dot dress" left the scene hurriedly, "shouting, "We shot him! We shot him! We shot Kennedy!"

3 Comments in Response to Sirhan Sirhan: In His Own Words

If this man is innocent, he needs to be released and reimbursed for his stolen life and time in prison.  Those responsible need to be brought to justice!  It is difficult to understand how our country can condone such acts as this.  Who will lead the fight to see justice done in this case?

I have never, ever, in my long years and experience did not meet a cop that did not lie.

And then came Leonard Peltier.

And before him, Raymond Yellowthunder.

And before him, many in a long line.

FBI to me means Full Blood Indian but it also means the Federal Beaureau of Incarceration/intimidation/infanticide.

Don't like the dirty bed you made for yourselves brothers? Try changing your dirty sheets.