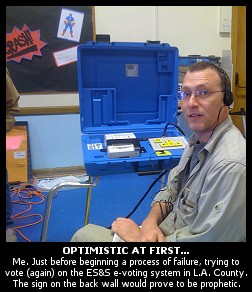 Two years ago, in June of '08, the ES&S "InkaVote Plus" e-vote system in Los Angeles County misprinted 4 out of 12 of my own votes.

Today, as I tried to vote on the same system, the failure was even worse. Incredibly. And not just because I cover issues of Election Integrity for a "living."

I spent more than two and a half hours not casting a vote on the system before eventually I, the poll workers, and, apparently, the folks at the L.A. County Registrar's central help desk call center, simply gave up. A complete and total failure of the e-voting system for disabled voters in the nation's largest voting jurisdiction. Again. On a system the county spent millions to buy in order to comply with the federal Help America Vote Act (HAVA) boondoggle by allowing disabled voters to cast their votes independently. Complete and total failure.

I did my best to document the disaster as it happened, in real time, on my Twitter feed. But the cell signal was very bad at the polling place, so not everything got out. But here's what happened in detail, and with a few graphics tossed in... As I did during the state primary in June of 2008, I requested to vote today on the ES&S InkaVote Plus audio balloting system. There is one for each of the two "precincts" in my polling place. In '08, the machine at my "precinct" wasn't working and the poll workers were afraid to touch it, due to exposed wires, so I was forced to vote provisionally on the machine at the other "precinct" inside the same polling place.

This time, the machine at my "precinct" was up and working, though I was the first to (try to) vote on it today, according to the poll workers.

1 Comments in Response to I Was Unable to Cast a Vote on L.A. County's ES&S E-Voting System (Again) Today

If you had called me for tech support I could have solved it instantly:

"Oh, you must be trying to vote for the wrong candidate. This isn't a bug, it's a design feature."