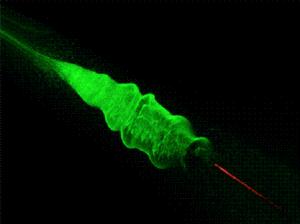 A laser has been used to generate small clouds on demand in lab, and real-world experiments suggest this could be a way to call down rain when it's needed.

People have experimented with cloud seeding for decades in the hope of boosting rainfall, usually by sprinkling silver iodide crystals into clouds high in the atmosphere.

These crystals encourage large water droplets to form around them, and the droplets then fall as rain – in theory, at least. "The efficiency of this technique is controversial," says Jérôme Kasparian at the University of Geneva, Switzerland, one member of a research team that think lasers may be a better way to trigger rain on demand.

Kasparian and colleagues have just reported the first successful use of this technique to summon clouds from air both in the lab and in the skies over Berlin, Germany.
Cloud chamber

In the lab the team fired extremely short pulses of infrared laser light into a chamber of water-saturated air at -24 °C. Linear clouds could be seen to form in the laser's wake, like a miniature airplane contrail.

Kasparian says that the laser pulses generate clouds by stripping electrons from atoms in air, which encourage the formation of hydroxyl radicals. Those convert sulphur and nitrogen dioxides in air into particles that act as seeds to grow water droplets.

Each laser pulse packs a 220-millijoule punch into just 60 femtoseconds – an intensity "equivalent to the power of 1000 power plants," says Kasparian.

However, conditions of extremely high humidity at low temperature like those of the lab experiment are unlike those seen in the atmosphere, says Daniel Rosenfeld, an atmospheric scientist at the Hebrew University of Jerusalem, Israel. "Whatever has been documented in this experiment is of little relevance to natural clouds," he says.

Kasparian counters that results from repeating the experiment in the skies of Berlin suggest the effect can work under natural conditions. His team sent pulses into the autumn sky, focussed 60 metres up. Nothing could be seen with the naked eye, but weather LIDAR, which uses lasers to measuring light scattering in the atmosphere, confirmed that the density and size of water droplets spiked when the laser was fired.

"As in the lab, the effect is clearly detected," Kasparian says. "It does not require saturation of the atmosphere."

His team will now try to boost the effect by optimising the laser wavelength, its focus and the pulse duration, which could produce droplets large enough to fall as rain.

The Best Weather App for RV Travel in 2021