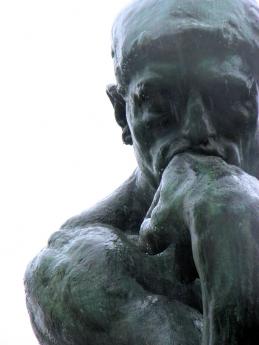 Ernest Hancock
In a land beset with the demands that you be a team player or supporter, from sports to politicts, I am not! From the comments and opinions on this page it would appear there are a few, a large number of Americans that are not team players but are MIDDLE AMERICANS!
This does not mean AVERAGE as there is no such animal in America.  They are first AMERICANS.  They vote for the least worse person or political parties statements at each election, they/you are that middle hated group that has a mind and gives a damn about who is elected.  They understand that the political parties do run one canidate to win and the other party purts up a canidate to loose because it is not the person in the White House or Congress it is about the few who control the money and power that never change.
If you are a MIDDLE AMERICAN you are a threat to both political parties.  If you understand that the way to keep the American people in debt is threw high fuel, power, medical and interest rates/home prices you are a danger to the american government.  If you scratch your head at trillions from nothing to banks and failing companies knowing the outcome is a failed economy or inflation at thirty percent a year, you are dangerous.  If you know that the most dangerous part of a gun is the person, you are a threat to America today.
However, you can know that there are millions of Americans that do think like yourself and they, you and I need only to start talking together to make the changes that will lead America away from the cliff we are now rushing towards, if you understand this we can change the future.
We are the back bone and strenth of America!  We  pay the bills, raise the kids no one ever hears about! Don\'t beat the wife, own guns, have a beer now and again, but don\'t join with others to direct the country because we feel they must know more then we do.  They, our leaders know less then you do.
I am asking that you do the single action you have never done before....take chagre of what you own ....  this great country.  The hardest step is to forward this and the second it to replie to this opinion. America is ours!  The people in government are not smartter then you!  You have been brain washed  into thinking government is too complicated for anyone to understand, it\'s not!  Now, today is the start of the new American future...
Casey, a MIDDLE AMERICAN and damn proud of it!!!!

Who Said Diversity and Multiculturalism Are So Wonderful?

Biden Versus Trump: Here's What You Will Get

Joe Biden's Promise: "I will work for Amnesty for all undocumented immigrants"

A Lifetime of Lies, Corruption and Malfeasance: Joe Biden

The Harshest Realities of America's Present and Future

Postscript to the Series: Will America Survive Another 100 Million Immigrants?

Part 10:Will America Survive Another 100 Million Immigrants: Our Resource Dilemma?