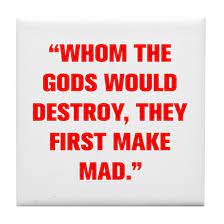 Whom the Gods Would Destroy They First Make Mad

The above is with attribution to Henry Wadsworth Longfellow in his poem, titled "The Mask of Pandora," saying in part:

"Ruin and desolation. All the walks

Are strewn with shattered boughs; the birds are silent

The melancholy reeds whisper together

As if some dreadful deed had been committed

They dare not name, and all the air is heavy

With an unspoken sorrow!

I have brought wrath and ruin on thy house!"

Time and again, its acquisition leads to abuse.

Its road to hell is paved with the worst of evil intentions.

Gore Vidal once said the following:

No longer is "the Constitution…a working machine."

The US wages (forever) wars "with somebody or other in order to justify the war machine."

"Now we have alienated almost the entire earth."

"We have been at war almost constantly since the (18th) century."

"And it has not helped our institutions."

"Congress no longer represents the people."

"The courts do not practice justice any more."

Powerful US interests "are longing for" wars with one invented enemy after another.

They invent them for this reason — based on "lies, lies, lies."

MSM go along, trampling on the rule of law they pay no heed to.

Nor do powerful US interests, craving greater power than they now possess with the worst of ill intentions in mind.

In previous articles I stressed that lunatics run the Washington asylum.

It's been this way for time immemorial, especially in recent decades.

They infest and dominate both right wings of the US war party.

"I would sink" all nuclear-powered ships.

"I am not proud of the part I played in it."

"That's why I am such a great exponent of stopping this whole nonsense of war."

"The lesson of history is when a war starts, every nation will ultimately use whatever weapons it has available" to win.

"Every time you produce radiation, you produce something that has a certain half-life, in some cases for billions of years."

"I think the human race is going to wreck itself, and it is important that we get control of this horrible force and try to eliminate it."

In 1961, over-the-top US General Curtis LeMay claimed that nuclear war with Soviet Russia was inevitable.

He called for launching thousands of nuclear missiles preemptively on its territory.

He considered retaliation against major US cities a small price to pay.

In disgust, Jack Kennedy walked out of a National Security Council meeting.

Wanting none of it, he told Secretary of State Dean Rusk:

"And we call ourselves the human race."

When most needed, bigger-than-life figures like JFK, RFK, MLK, and likeminded individuals with political influence in the US aren't around anymore.

Lunatics in Washington run things at a time when today's super-weapons make ones used during WW II and its near-term aftermath seem like toys in comparison.

Hegemon USA is addicted to forever wars for maximum wealth, power, and control over planet earth, its resources and populations.

Throughout US history from inception, rarely ever was there a time of peace.

A near-perpetual state of war has gone on internally and/or abroad since the 18th century.

Nations that live by the sword perish in similar fashion to what they unleash on others.

Given the destructive power of today's super-weapons, life on earth is endangered if they're used in enough numbers.

The risk of preemptive war by hegemon USA against nonbelligerent, nonthreatening Russia is ominously high by accident or intent.

Their numbers are increasing over stepping back from the risk of direct confrontation at a time when Biden regime hardliners are dismissive toward Moscow's legitimate security concerns.

Time and again, Russia is falsely blamed for things it had nothing to do with.

It's falsely blamed for aggressive actions committed by US-dominated NATO.

"(H)ow (will the US-dominated) West…implement (agreements) it has signed on to?"

"I would like to assure you that our leadership is able to reliably protect Russia's interests, both in terms of security and in terms of upholding our citizens' rights."

Keep in mind what dominant US hardliners and their MSM press agents repeat almost daily about their invented threat of a "so-called Russian invasion of Ukraine."

"(B)y spreading complete disinformation that we are preparing a provocation," they manufactured a myth as a possible pretext for preemptive war.

Since the Obama/Biden's 2014 coup, Ukraine has been "externally governed by the US."

It's used as proxy Pentagon/CIA force for central Europe aggression along Russia's border.

If what's going on escalates more than already and spills cross-border into Russian territory, all bets are off.

Is this what dominant Biden regime hardliners intend?

Are they dreaming war on Russia?

Do they have a major false flag in mind to launch it?

Along with mass-extermination of unwanted millions and billions of people at home and abroad by kill shots — as well as plotting full-blown social control tyranny — will dominant US hardliners launch WW III this year?

With lunatics in charge of the Washington asylum, what's unthinkable is ominously possible.

After Fierce Resistance, DHS Forced to "Pause" Its Disinformation Board & Corporate Media

GAME OVER: They Got CAUGHT!