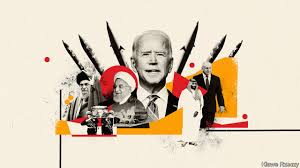 On all things domestic and geopolitical, Biden and hardliners around him continue longstanding US dirty business as usual.

On Iran and other nations free from US control, their agenda is all about trying to transform them into pro-Western vassal states — war by hot and/or other means their favored strategies.

Pay no attention to head fake deception by Biden regime officials on Friday and what's likely to be more of the same ahead.

Throughout the post-WW II period, the US proved time and again that it can never be trusted.

Under Republicans and Dems, Washington has no intention of normalizing relations with Iran, China, Russia, and other nations unwilling to bend to their will.

If Biden was serious about rejoining the JCPOA, he'd do it with no pre-conditions and lift illegally imposed US sanctions.

What he failed to do suggests continued toughness on Iran with no end of it in prospect.

"US acknowledged Pompeo's claims re Res. 2231 had no legal validity. We agree."

"In compliance w/2231: US unconditionally & effectively lift all sanctions imposed, re-imposed or re-labeled by Trump."

"Reminder: Because of US withdrawal from JCPOA, there is NO P5+1."

"Remember, Trump left the room and tried to blow it up."

Dropping illegal "snapback" and travel restrictions on Iranian officials was head fake softening of US policy toward Iran, not the real thing.

For Biden and hardliners around him, a so-called "diplomatic way forward" is unconditional Iranian surrender to unacceptable US demands.

They want Iran weakened militarily. They want it vulnerable to US/NATO/Israeli aggression.

They want its liberating revolution reversed, its sovereign independence eliminated, its resources plundered, its people enslaved.

They want an Iranian imperial trophy. Their agenda is all take and no give.

Nothing changed except deceptive rhetorical posturing, no meaningful actions.

Price repeated Big Lies about Iran. Claiming it pursues "destabilizing activities" is how the US and its imperial partners operate, not the Islamic Republic.

"(W)e will continue to use our authorities to dissuade countries from providing arms to Iran" — ignoring its legal right to buy them.

Unlike the US, NATO and Israel, Iran's military development is solely for self-defense, its UN Charter right.

Russia, China, and other nations may not be legally prevented from selling weapons to Iran.

Posturing aside on Friday, earlier, and what's likely ahead, the new regime in Washington is militantly hostile toward Iran like its predecessors.

Chances for that to change ahead are virtually nil.

Regime change remains hard-wired US policy toward Iran and other nations free from its control.

Looking ahead, peace, stability, observance of the rule of law, and diplomacy as it should be with Iran and other sovereign independent nations are off-the-table.

AP News was like others, falsely claiming that "Biden (is) ready to join talks with Iran and world powers to discuss a return to the 2015 nuclear deal, in a sharp repudiation of former President Donald Trump's 'maximum pressure campaign' that sought to isolate the Islamic Republic (sic)."

The above defies reality.

US dirty business as usual continuity under Biden remains unchanged.

Does he intend turning US war on Iran by other means hot?

Will he embroil the Middle East in greater wars than already?

Instead of withdrawing from the region militarily, greater numbers of troops are being deployed to Iraq, Syria, and elsewhere in the Middle East — on the phony pretext of combatting ISIS the US created and supports.

Throughout his near half century in Washington, Biden abhorred peace and stability.

He likely has greater belligerence in mind ahead.

There's virtually nothing positive about his domestic and geopolitical agendas.

In a few short weeks, he broke every campaign promise of importance.

He operated the same way as US senator and vice president.

On his watch, the worst ahead at home and abroad is highly likely.