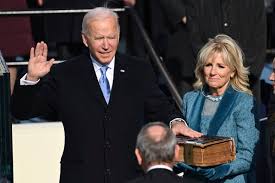 Four years ago on January 20, Trump vowed to transfer power from Washington "and give it back to you, the people (sic)."

Saying while privileged Americans prospered, ordinary ones struggled to get by.

"That all changes starting right here and right now because this moment is your moment. It belongs to you (sic)," he said, adding:

"The forgotten men and women of our country will be forgotten no longer (sic)."

"The American carnage stops right here and stops right now…The oath of office I take today is an oath of allegiance to all Americans (sic)."

We know how his mass deception turned out.

Time and again, political candidates promise one thing, then deliver something entirely difference if elected, notably in the US.

Government of, by, and for all Americans equitably is pure fantasy.

Like most of his predecessors, Trump served privileged interests exclusively at the expense of ordinary people he was indifferent toward.

Will that all change right here, right now under Biden/Harris?

Will the sun henceforth rise in the West and set in the East?

Dissembling is what politicians do. It goes with the territory, especially in the West, the US most of all.

It's why they can never be trusted. Rare exceptions prove the rule.

Biden built a near-half century political career on a foundation of Big Lies and mass deception.

They'll surely continue as long as he remains in office.

What almost never happens in the US surely isn't what's coming ahead. Expect the opposite.

Prepare to be betrayed because it's baked in the cake.

Once a servant of privileged interests and his own exclusively over the general welfare, always one.

That's what he's always been all about. The same goes for Harris over a shorter duration.

Otherwise they wouldn't have been chosen to replace Trump.

They're reliable, controllable, and vitually certain to make an already bad situation worse on their watch for ordinary people at home and abroad.

That's the only change I expect ahead — a dark chapter in US history growing darker, dystopia on their watch to deepen.

Harris is president in waiting, a hardline former prosecutor to take over when cognitively impaired Biden can no longer fake it even in sound bites.

He long ago abandoned public addresses, a lookalike double making them for him — including his inaugural address.

Roots of tyranny already exist in the mythical land of the free and home of the brave.

Follow their further sprouting ahead as dark forces controlling Biden/Harris likely snuff out what remains of a free and open society to solidify unchallenged deep state control.

Biden's tenure began by mandating harmful-to-health face masks that don't protect in federal buildings and on its lands by executive order.

It "call(s) on governors, public health officials, mayors, business leaders and others to implement masking, physical distancing, and other measures to control Covid-19," according to the new regime's seasonal flu (renamed covid) czar Jeff Zients.

Will the above be mandated ahead nationwide — followed perhaps by mandated vaxxing with what risks great harm or worse when taken as directed?

Will the above and mandated vaccine passports for access to public places become part of the new abnormal?

Will dissent against unacceptable Biden/Harris regime policies be criminalized as domestic terrorism?

Will we be cowed into submission to US dark forces for our own good?

Will war on humanity at home and abroad harden under selected, not elected, Biden/Harris — an illegitimate duo now empowered?

After attending their inauguration with the capital under unprecedented lockdown and militarization, Russia's envoy to Washington Anatoly Antonov said the following:

After monitoring Wednesday's events and public remarks on US television, "I can't say that we found a lot of positive in the speeches" made by elements of the new regime in town.

Antonov, other Russian officials, and their counterparts in other nations free from US control know that chances for improved relations between their countries and Washington is virtually nil.

The new regime's geopolitical agenda is sure to be uncompromisingly hardline against all nations unwilling to sacrifice their sovereign rights to a higher power in Washington.

"Those who participated in unauthorized political actions everywhere were anointed by Washington as fighters for freedom and democracy."

"When the same thing happen(s) in the (US), (they're) labelled…domestic terrorists who face 15-20 years in prison."

That's part of how the US operates at home and abroad — a take no prisoners approach to governing.

No government of, by, and for everyone ever existed from inception, no democracy other than a fantasy version wrapped in the American flag to foster the illusion of what doesn't exist and never did.

The US is run by deep state militarists, corporatists, and other tyrannical elements for their own self-interest at the expense of ordinary people everywhere — to be exploited, not served.

Biden/Harris were chosen to front for the dirty system at a time of imperial USA's deepening decline en route to history's dustbin where it belongs.

They're beholden to dark forces controlling them.

Will martial law be declared ahead on the phony pretext of foreign threats and domestic terrorism to counter?

Will what remains of a free and open society be replaced by full-blown totalitarian rule, enforced by police state harshness?

Make no mistake. Biden/Harris and members of their regime are enemies of ordinary people, hostile to their interests, wanting them exploited, not served.

Along with likely escalated foreign aggression against one or more invented enemies, homeland despotism will likely harden on their watch for our own good we'll likely be told.

With history in mind in my lifetime since Franklin Roosevelt goaded imperial Japan to attack the US, knew Pearl Harbor was coming but failed to warn its commander to give him the war he wanted, America has been on a downward trajectory toward full-blown despotism.

JFK, RFK and MLK were eliminated for standing in the way of what US dark forces have been pursuing for generations.

Trump was an aberration so had to be denied a second term, brazen fraud the vehicle to elevate Biden/Harris to power.

Public mind control convinces most people to go along with what harms their health, welfare, safety, and a nation unfit to live  in.

A permanent war on humanity rages at home and abroad, Biden/Harris appointed the latest maestros of misery over ordinary Americans.

Their diabolical mission is hidden behind smiling faces, a facade that's part of mass deception.

They'll preside over affairs of state extrajudicially like most of their predecessors.

Wreckage they inherited may be shattered beyond repair before passing the baton to what's likely to be full-blown tyranny under whoever succeeds them — based on what's been happening post-9/11, greatly escalated last year.

A nation "which lectures the whole world about the standards of democracy" denies it to its own people and tolerates it nowhere else.

That's the agenda Biden/Harris inherited, charged with serving the interests of dark forces controlling them.

Forewarned is forearmed. The only solution is popular revolution.

The alternative is ruler/serf USA ahead.

It's baked in the cake without all-out resistance to reject what no one should accept.

Biden Regime to Escalate War on Russia by Other Means?

Barbarians at the Gates?