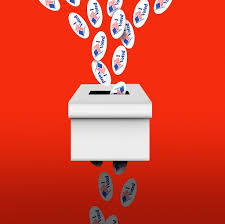 The US political process is too debauched to fix.

Tinkering around to edges to turn around a system too broken to fix won't work.

When asked long ago whether after breaking from Britain in 1776 if a republic or monarchy was established, Benjamin Franklin warned as follows:

"A republic if you can keep it."

The US is increasingly a totalitarian autocracy, plutocracy and kleptocracy, never a democracy — a notion its founders abhorred, what's clearly prohibited today.

Governance from inception to now was remains of, by, and for privileged interests at the expense of most others.

Elections when held are farcical, voting a waste of time.

Enfranchisement is more myth than reality.

Ordinary Americans have no say over how they're governed or by whom.

Higher authorities decide — always according to what serves their interests and other members of the US privileged class exclusively.

According to the Thomas More Foundation's Amistad Project — a civil liberties organization — up  to 280,000 completed US Election 2020 absentee ballots disappeared after arrival in Lancaster, PA from Bethpage, NY.

The DOJ, US attorneys, and local prosecutors are aware of evidence the Amistad Project discovered.

AG Barr falsely claimed that his probe so far found no evidence of fraud, knowing full well it occurred.

Kline named Jesse Morgan, a truck driver for a USPS subcontractor, as one of his whistleblower sources.

The disappearance of absentee ballots and truck transporting them to Pennsylvania occurred on October 21.

According to Morgan, USPS personnel "grossly deviate(d)" from normal procedures and behavior on and around the above date.

Another USPS whistleblower, identified as Madison, Wisconsin-based Ethan Pease, claimed awareness of a scheme to backdate tens of thousands of post-election arriving ballots.

Separately, Kline explained that sworn-under-oath testimonies suggest that "over 300,000 ballots are at issue in Arizona, 548,000 in Michigan, 204,000 in Georgia, and over 121,000 in Pennsylvania" —along with the PA ones discussed above.

Evidence suggests significant Election 2020 fraud in these states and others.

Were hundreds of thousands of completed ballots from GOP majority areas illegally transported across state lines to destroy them?

According to truck driver Morgan, "24 gaylords, or large cardboard containers of ballots, (were) loaded into my trailer."

"These gaylords contained plastic trays, I call them totes or trays of ballots stacked on top of each other."

Morgan believes USPS employees were involved in a plot to steal votes.

"This evidence joins with unlawful conduct by state and local election officials, including the acceptance of millions of dollars of private funds, to undermine the integrity of" Election 2020.

He transported them from Bethpage, NY to Harrisburg, PA (the state capital) — where he was told to deliver them to Lancaster, away from public view and tabulation.

A Traverse City, Michigan postal worker said he was ordered to backdate ballots.

Other postal workers in Coraopolis, Erie, and Elkins Park, Pennsylvania were told to backdate ballots and halt delivery of Trump mail.

On Monday, attorney Sidney Powell accused Dominion of "massive fraud" and lying about it, adding:

Voting machine software was designed to facilitate fraud, she maintains.

According to her assessment, it occurred in Pennsylvania, Michigan, Georgia, and other key swing states where Dominion machines were used.

Trump team evidence is based sworn eyewitness statements and testimonies by experts.

It's clear that significant fraud occurred.

If a Supreme Court majority agrees — what's highly unlikely based on judicial rulings so far, but possible — a mass media supported conspiracy for Biden/Harris over Trump could leave Election 2020 undecided and the nation in an uproar.

Yet chances of things turning out this way are slim.