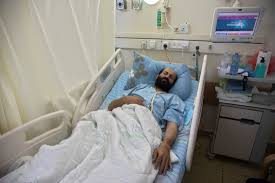 Time and again, its ruling regimes arrest Palestinians for the "crime" of being unwanted Arabs in a Jewish state.

On July 27, the Netanyahu regime unlawfully arrested and administratively detained Maher al-Akhras, holding him uncharged and untried — how all police states operate, Israel one of the worst.

Refusing to eat became his way of resisting, his redoubtable struggle lasting 103 days.

Around 350 other Palestinian political prisoners languish in Israel's gulag, uncharged and untried.

US and other Western regimes actively support them.

Longstanding Israeli politicized detentions, torture, and other forms of mistreatment are largely ignore in the West — including by their abominable media, supporting crimes in high places instead of exposing and denouncing them.

The International Court of Justice (ICJ) affirmed self-determination as an essential principle of international law.

The 1960 Declaration on Granting of Independence to Colonial Countries and Peoples condemned "colonialism in all its forms and manifestations."

The 1998 Rome Statute of the International Criminal Court denounced it.

Under Article 9 of the International Covenant on Civil and Political Rights (ICCPR):

"No one shall be subjected to arbitrary arrest or detention."

"No one shall be deprived of his (or her) liberty except on such grounds and in accordance with such procedure as are established by law."

Israel is an ICCPR signatory. Yet virtually daily, it breaches what it mandates and most other international laws.

Like the US, the Jewish state operates by its own rules exclusively — consistently and repeatedly committing high crimes of war, against humanity, and other atrocities, millions of long-suffering Palestinians their main victims.

"Maher Al-Akhras, a 49-year-old Palestinian and a father of six, is facing a serious and imminent threat to his life at Kaplan Medical Center."

"Due to a deficiency of salts and fluids in his body, and his refusal to take nutritional supplements, Maher has been experiencing frequent seizures, acute headaches, significant weakness in his vision and hearing, in addition to severe pain all over his body, especially his chest area."

When unlawfully arrested in July, he announced his intention to hunger-strike for justice.

His open-ended mission also aimed to highlight, resist, and condemn Israel's longstanding policy of administrative detention of Palestinians in defiance of international law.

First arrested in 1989, "he was imprisoned for seven months, again in 2004 for two years," Addameer explained, adding:

"In 2009, he was detained and spent 16 months in jail under administrative detention."

"His fourth arrest was in 2018, where he was detained for 11 months under administrative detention."

According to medical assessments of his condition, he's "on the verge of suffering major organ failure and some damage might be permanent."

On November 8, Akhras suspended hunger-striking in response to Israel's high court ruling for his release on November 26.

"My freedom is the freedom of my people, and we have won over the occupation with our will and determination," he said.

Knowing how the scourge of Israeli apartheid works from past experience, his freedom could be short-lived.

Like countless other administratively detained Palestinians, including hunger-strikers for justice, Akhras may and most likely will be arrested and detained unjustly again.

The abhorrent practice is one of many Israeli high crimes against humanity.

Millions of Palestinians are held hostage to its viciousness.

Arab League Morocco Will Have Peace Deal With Israel