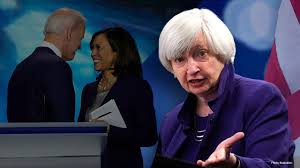 In response to her selection, the Dow topped 30,000 for the first time in market history.

The disconnect between equity prices and Main Street reality is stark.

It's happening during economic collapse with over one-fourth of working-age Americans left jobless.

According to Feeding America, one in six Americans are food insecure — unsure about how families will be fed.

At yearend, an evictions moratorium ends.

Without federal aid not forthcoming since benefits expired for millions of Americans at end of July, a tidal wave of evictions could follow.

Pandemic Unemployment Assistance (PUA) and Pandemic Emergency Unemployment Compensation (PEUC) also expire at yearend — beneficiaries to be on their own if follow-up aid isn't provided.

What's going on exceeds the worst of earlier hard times in US history.

In 2013, the Obama/Biden regime appointed Yellen to succeed Ben Bernanke as Fed chairman.

"If I were a benevolent dictator," he'd limit the Fed solely to maintaining price stability.

He'd make sure the economy got enough liquidity to function normally.

He'd eliminate "immoral hazard" made possible by the Greenspan/Bernanke/Yellen put — flooding the market with liquidity, along with maintaining near-zero short interest rates over most of the past decade.

Grantham once compared Fed policy to beating a donkey "until it either turns into a horse or drops dead from too much beating."

"We've been conned" at the expense of lost industrialization and failure to "educat(e) a new generation," he added.

"We're in this death grip that only paper things matter."

Retirees are deprived of vital income. Financial interests are served at the expense of the real economy.

Their tenure at the Fed reflects its  most "shameful chapter in American financial history" — chairman Powell going the same way.

It's been at the expense of economic growth and the public welfare.

According to a University of California study, 95% of wealth accumulation since 2009 accrued to the wealthiest 1% of Americans.

Yellen as Treasury secretary along with Powell will likely continue monetary madness QE and near-zero short interest rates into the new year and succeeding ones — at the expense of economic growth and jobs creation.

Admitting prices are "elevated" at "the high end of historical ranges," she added the following:

"(E)conomists are not great at knowing what appropriate valuations are (sic)."

"We don't have a terrific record. And the fact that those valuations are high doesn't mean that they're necessarily overvalued (sic)."

"We're enjoying solid economic growth (sic) with low inflation (sic), and the risks in the global economy look more balanced than they have in many years (sic)."

"(W)hen we look at other indicators of financial stability risks, there's nothing flashing red there or possibly even orange (sic)."

"We have a much more resilient, stronger banking system (sic), and we're not seeing worrisome buildup in leverage or credit growth at excessive levels (sic)."

The above deception comes at a time of economic collapse, mass unemployment, profound human deprivation and despair — with things likely to worsen in the new year, not improve for ordinary Americans.

Citing the US Office of the Comptroller of the Currency's most recent quarterly report through June 30, WSP said the following:

"JPMorgan Chase had increased its derivatives exposure to $52.6 trillion notional."

"Goldman Sachs had moved into second place with $43.3 trillion."

"This massive, concentrated exposure to derivatives at four mega Wall Street banks has been allowed to persist by both (Dem) and (GOP)-led (regimes) despite the fact that derivatives played a central role in blowing up the US economy in 2008."

"Until Congress gets serious about restoring the Glass-Steagall Act, which would separate federally-insured, deposit-taking banks from the trading casinos on Wall Street, the financial system of the United States remains at grave risk, regardless of who sits at the helm of the regulators."

The real world described by WSP that Yellen ignored in her above-quoted remarks is what she'll face as Treasury secretary — not the fantasy one she pretends exists.

Based on her accommodative Fed record, currently followed by chairman Powell, bubble US equity markets are likely to inflate further on their watch.

Only hindsight will tell to what levels before they crash with a bang heard round-the-world.

Based on his firm's research, Grantham explained that all markets eventually revert to their mean level.

They've been no exceptions to the rule in market history.

The greater they inflate to unsustainable levels, the harder they're likely to plunge when their day of reckoning arrives.