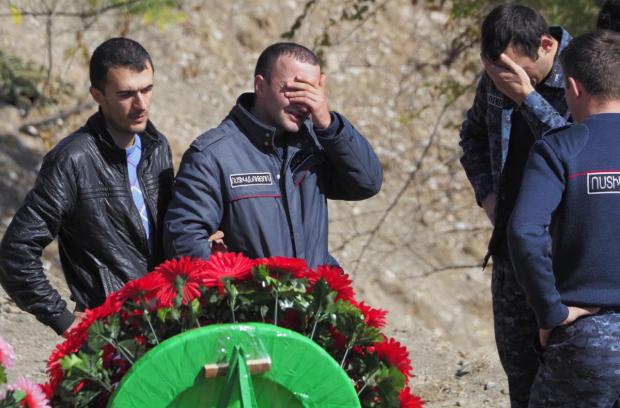 Wars by their nature are dirty, rules-based order largely or entirely ignored.

Warring sides do whatever it takes to defeat each other. Civilians caught in the crossfire are harmed most.

A month of Azerbaijan-initiated conflict against Armenia in Nagorno-Karabakh (NK below) reportedly caused thousands of casualties.

Two earlier ones failed to take hold straightaway. Will this one fare better?

"The United States facilitated intensive negotiations among the Foreign Ministers and the Minsk Group Co-Chairs to move Armenia and Azerbaijan closer to a peaceful resolution of the Nagorno-Karabakh conflict."

Despite the above announcement, heavy fighting continued throughout the weekend, including past the above-announced time when ceasefire was to take hold — not so far.

Each side blamed the other for earlier breaches. On Sunday, Azeri President Aliyev he's ready to implement ceasefire if Armenian forces withdraw from NK.

"A ceasefire cannot be without conditions," he said.

"The truce is possible only after Armenian leadership announces withdrawing its troops from Azerbaijan's occupied territories."

For Yerevan, it's been a non-starter since conflict began.

"To solve this issue, we need mutual concessions. Every time Armenia expresses willingness to make any concessions…Azerbaijan comes up with new demands, new conditions."

"(E)thnic Armenian officials in Nagorno-Karabakh said Azeri forces were shelling their positions in northern and southern areas of the line of contact that divides them," adding:

"The Azeri Defense Ministry said Armenian forces had shelled its positions in the Garanboy, Terter and Aghdam regions of Azerbaijan overnight and said the Agjebedin region was being shelled on Monday morning."

"Azerbaijani President Ilham Aliyev accused Armenian forces of violating the truce, and said in a Twitter post there were "dead and wounded due to these heinous actions."

Russian, French and US OSCE Minsk Group foreign ministers will meet in Geneva on Thursday "to discuss, reach agreement on, and begin implementation, in accordance with a timeline to be agreed upon, of all steps necessary to achieve a peaceful settlement of the (NK) conflict," a joint statement said.

"The Islamic Republic of Iran, while reinforcing the defensive measures at border areas, stresses that the security of border areas and Iranian people is the country's red line."

He urged both sides to resolve differences through dialogue, what hasn't been achieved so far — including past the deadline to halt fighting on Monday.

On Sunday, an NK statement said fighting continues "on all directions of the frontline."

Will ceasefire 3.0 take hold this time despite what's been irreconcilable differences between both sides?

On Monday, fighting continues, halting it not achieved so far.

Happy Birthday USMC, Here is the Truth About War from Your Most Famous General

Agreed on Armistice in Nagorno Karabakh?