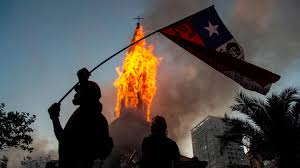 Chileans Vote Up or Down on Constitutional Change

Since the CIA elevated Augusto Pinochet to power on an earlier 9/11 day of infamy in 1973 — replacing social democracy with tyrannical fascist rule — Pinochet's ghost still haunts most Chileans.

Since 2019, millions of Chileans took to the streets against deep-seated corruption and inequality, high prices, poverty wages, and governance for privileged interests exclusively at the expense of most others.

They privatized state enterprises, handing them to corporate predators.

So did harsh repression against labor and other ordinary people.

Most Chileans demand Pinera's resignation and a new constitution.

He remains in office. On Sunday, Chileans are voting up or down on drafting a new constitution to replace the current repressive one.

Ahead of Sunday's vote, Chileans filled Santiago streets and elsewhere in the country for fundamental changes they demand.

They include higher wages, affordable prices, pension reform, free education and healthcare, along with a nation fit to live in.

Voting age Chileans are expected to turn out en masse for democratic change over fascist repression and a constitution that reflects it.

Widely despised Pinera has rock-bottom support of around 10% or less.

Choice for voters on Sunday is twofold: whether or not to draft a new constitution and if approved, what type body to prepare it.

On the latter issue, voters have two choices:

A constitutional convention with equal numbers of legislators and popularly elected delegates or a body comprised entirely of voter-elected members.

According to results of an Activa Research poll published on October 10, nearly 85% of Chileans want a new constitution, only 15% against drafting a new one.

If majority Chileans approve preparation of a new one, a vote to elect drafting body delegates will follow on April 11, 2021.

Once assembled, the Constitutional Convention will have nine months to draft a new document.

It must be approved by a two-thirds majority.

Within 60 days of approval, Chileans will have final say up or down on the new document by a simple majority through a national plebiscite.

If approved, it would become effective in 10 days.

It'll be months to complete the process that begins on Sunday — with no assurance of the outcome no matter what changes most Chileans demand.

They've lived under repressive rule for nearly half a century.

Based on large-scale protests since last year, Chileans want equity and justice over ongoing fascist rule.

If the referendum and constitutional drafting process don't deliver it, they'll likely be back in the streets again demanding their fundamental rights.

Chile has around 15 million eligible voters. They include citizens aged-18 or older and foreign nationals who've lived in the country over five years and have not been convicted of a crime.

Chileans abroad may vote at consulates where they reside.

Voting is scheduled from 8AM to 8PM or later at stations if queues remain.

Special voting hours for Chileans aged-60 or older exclusively are from 2PM - 5PM.

Individuals diagnosed with covid disease are prohibited from taking part in the process.

Official results of Sunday's referendum may not be known until late November.

Electoral officials have until November 27 to announce them.