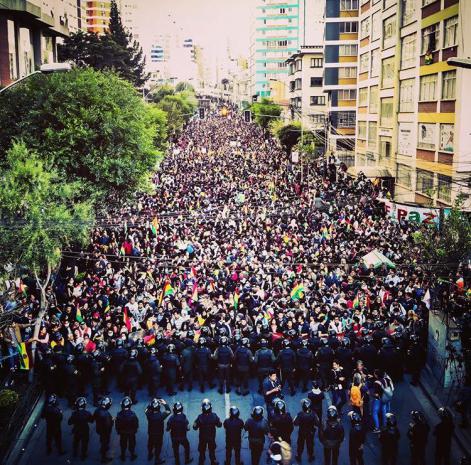 In November, US orchestrated fascism replaced freedom in Bolivia.

President Evo Morales' legitimate reelection was overturned by a cadre of US recruited traitors.

Generals and others were bribed to betray their country for the right price.

Months after the coup from exile in Argentina, illegally ousted President Evo Morales explained the following:

The country was "return(ed) to neoliberal times with more unemployment, poverty, hunger, corruption, nepotism, criminalization of the protests, persecutions and violation of the freedom of expression."

"Fascism and racism have been reborn."

The US-installed coup d'etat regime is responsible for "massacres, persecutions, imprisonments, dismantling of public companies and inability to deal with the pandemic."

"Only (ordinary) people can save the people, and we will regain democracy."

A coup d'etat "transitional" regime is making "illegal decisions that compromise our future, such as GMOs for human consumption, debts with the International Monetary Fund, changes in economic model, reversal of land (distribution), and mining concessions in favor of big entrepreneurs."

Since illegally replaced as president, state terror against the Bolivian people has been official coup regime policy.

"Despite…increased repression, the people of Bolivia remain on the streets."

"Will free and fair elections be held in Bolivia?"

Tyrannical regimes don't relinquish power easily. The answer to the above question remains to be determined.

It showed that Movement for Socialism (MAS) candidates for president and vice president, Luis Arce and David Choquehuanca respectively won overwhelmingly by a 52.4 to 31.5% margin over former right-wing president Carlos Mesa.

To win a first round triumph, Arce and Choquehuanca needed over 40% support with at least a 10% margin over the closest runner-up challenger — or over 50% of the vote for a clear majority.

"We still do not have an official count, but from the data we have, Mr. Arce and Mr. Choquehuanca have won the election," adding:

"I congratulate the winners, and I ask that they govern thinking of Bolivia and of democracy (sic)."

In the days and weeks ahead, it remains to be seen if governance of the people returned to Bolivia.

The party now controls the executive and legislative branches, the coup d'etat regime soundly defeated — if it sticks.

Separately, Morales tweeted: "We are going to return dignity and freedom to the people."

"Very soon our country will begin a new stage of great challenges."

"We must put aside differences and sectoral and regional interests to achieve a great national agreement."

Late Sunday, head of the coup regime's electoral council failed to say when official results would be released.

"We need to be certain about the results," he said.

PD explained that voting on Sunday "was largely peaceful and was marked by a high turnout," adding:

In the run-up to the election, "there was a huge amount of uncertainty about whether a free and fair election would be permitted and if its results would be recognized."

Uncertainty persists despite Anez's acceptance of the outcome.

Venezuela's Nicolas Maduro tweeted the following in response to the result:

"Great victory! The united and conscious Bolivian people defeated with votes the coup that (ousted) our brother Evo."

"They overthrew @evoespueblo and from exile I WON them. @LuchoXBolivia is the President! The Bolivian people defeated GOLPISM and fraud."

On Monday, Reuters reported that MAS' candidate "is set to win the country's presidential election without the need for a run-off, an unofficial rapid count of the vote indicated."

The CIA-linked Washington Post said "(e)xit polls (on) Monday showed Bolivia's Socialists taking a seemingly insurmountable lead in the country's bitterly fought presidential election, a result that, if confirmed by the official tally, would amount to a massive popular rebuke of the right-wing forces that drove the left from power a year ago."

Mesa is linked to right wing elements in the US, Big Oil, and other regional corporate interests.

The Camacho is connected to a Christian fascist paramilitary group called the Union Juvenil Crucenista, based in Santa Cruz, Bolivia's largest city.

In La Paz at his campaign headquarters, Arce said "(w)e have recuperated democracy and, more than anything, the Bolivians have recovered hope," adding:

"We promise to respond to our pledge to work and bring our program to fruition."

"We are going to govern for all Bolivians, and construct a government of national unity."

Following establishment of a US republic in 1776, Benjamin Franklin warned the nation's founders that creating it depends on "if you can keep it."

The warning applies to MAS leadership in Bolivia.

The same goes for ruling authorities of all nations on the US target list for regime change.

If Arce's election is officially confirmed, it remains to be seen how he'll govern.

Will pledges to ordinary Bolivians be fulfilled or will he and MAS bend to a higher power in Washington and internal monied interest?

It'll take a while to find out.