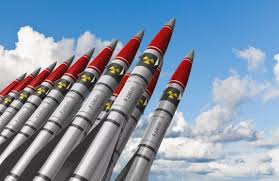 As long as nuclear weapons exist, the chance of their use ahead — as once before unjustifiably — is ominously high.

Humanity has a clear choice. Eliminate these weapons entirely or risk their eliminating us.

The history of warfare shows that warring sides use whatever weapons exist in their arsenal, if necessary, to win.

If two nuclear armed nations clash one day — notably the US v. Russia or China — these WMDs may be used by both sides to defeat the other.

Nuclear wars if waged are unwinnable. If these weapons used in future warfare, planet earth and humanity will lose.

New START is the last remaining Russia/US agreement to prevent unconstrained expansion of nukes that can kill us all if detonated in enough numbers.

The film's location is Australia, the last part of the world to be irradiated. Its last scene is chilling.

The end shows them empty, devoid of life and windblown.

A church banner ironically reads: "There is Still Time…Brother."

No longer. Radiation poisoning is unforgiving. It has final say.

Kramer's film explains the madness of nuclear war. Yet it's almost never shown in the US.

Its lesson is that if nuclear war is waged, there's no undoing what happens, no second chance, no salvation from slow painful irradiated death.

Famed dancer, singer, actor, choreographer Fred Astaire played an Australian scientist in the film — the role far removed from his usual ones.

He commits carbon monoxide suicide to avoid the agony of death by radiation poisoning.

Extending New START for another five years with no preconditions — as Putin proposed — should be a no-brainer.

Things aren't working out this way. On February 5, 2021, the landmark agreement will expire as long as unacceptable Trump regime demands remain unchanged.

Reportedly, Trump paused the discussion to ask aides what New START is all about. He didn't know.

With scant understanding of its details, he subsequently called it a "bad deal" — his faulty indictment similar to other landmark agreements he abandoned, notably the JCPOA and INF Treaty.

Russia/US New START talks are at impasse. As things now stand, the agreement will expire unextended in February.

As a result, the world will be far less safe than already. The risk of nuclear war one day will be greater than now.

Reportedly last month, Trump asked the US Strategic Command to assess how quickly nuclear weapons could be readied for use via bombers, submarines, and missiles (short and long-range) if New START expires.

Trump's envoy for arms control Marshall Billingslea said if Russia doesn't agree to US demands pre-election, "the costs (will) go up."

"It is up to the United States. The ball is in their court."

"Either they give up their ultimatums and then we can start the talks about something or there's no deal."

Impasse between both sides continues because of the Trump regime's unbending position.

Ryabkov stressed that "there are no grounds for any kind of deal in the form proposed" by Washington.

Trump regime unwillingness to extend New START for another five years with no pre-conditions, as Putin proposed, shows it's not serious about preserving the landmark agreement.

The cost of its expiration is a hugely dangerous arms race.

It's unclear what a Biden/Harris regime will do if succeeds Trump in January.

Their campaign website says Dems will pursue New START's extension, "us(ing) that as a foundation for new arms control arrangements."

Time and again, politicians say one thing — notably when campaigning — then do something entirely different if elected.

In September, Billingslea said if Russia doesn't agree to Trump regime demands, the US will increase its strategic arsenal "immediately after the expiration of (New START) in February."

Last July, Sergey Lavrov said if the US doesn't agree to extend the agreement, "we will not insist."

Billingslea's undefined short-term extension proposal is unacceptable to Moscow because it would give the US wiggle-room around maintaining what New START stipulates.

Russia wants the agreement preserved in its current form.

With New START as a foundation, Moscow calls for including nuclear armed Britain and France in future arms control talks.

Billingslea rejected talks on these issues, including removal of US nuclear weapons from Europe, some close to Russia's border.

China expressed unwillingness to join in nuclear arms control talks unless the US decreases its arsenal to match numbers the PLA maintains.

The US has around 6,000 nuclear weapons, China two to three hundred, the latter according to a DOD estimate.

"(V)erification procedures (in place give the US) great insight into Russia's capabilities, numbers, and all kinds of things associated with their nuclear weapons."

Without them, "we would have to go look for other ways to fill in the gaps."

The US "got what it wanted in the New START verification regime: streamlined inspection procedures at a sufficient level of detail to be effectively implemented."

If Biden succeeds Trump, it's unclear if he'll urge renewal with no pre-conditions or pursue an arms race instead.