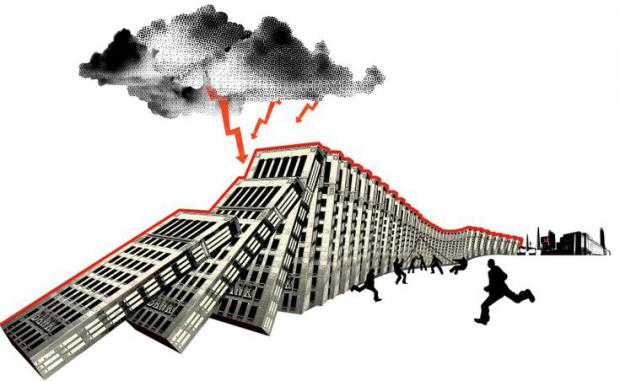 Economic Collapse the Worst in US History

The myth of recovery ignores the  US economy's dismal state.

Numbers calculated as they were pre-1990 before rigging them occurred tell all.

According to economist John Williams, real US unemployment is 32.1% — not the phony Bureau of Labor Statistics phony 11.1%.

Around one-third of working-age Americans are jobless — the number far exceeding peek 25% unemployment during the 1930s Great Depression.

Rising gold and silver prices reflect inflation fears because of money printing madness by the Fed and countless trillions of dollars spent for militarism and endless wars.

According to Williams, real year-over-year inflation is 8.3%, not the phony 0.6% figure for the 12 months through June.

Q II GDP contraction will likely be -50% when reported, an unprecedented economic plunge in US history.

On Thursday, the Economic Policy Institute (EPI) reported that US unemployment "remains at historic levels" — things likely to worsen before improving that's unlikely any time soon.

It was the 18th straight week that new claims exceeded a million. They never once approached this level before in US history.

On Thursday, the Bureau of Labor Statistics (BLS) underreported the true number, saying there were 1.4 million new claims.

EPI stressed that it's reporting the wrong number, ignoring Pandemic Unemployment Assistance (PUA) — "the federal program for workers who are not eligible for regular UI, like the self-employed," adding:

"It also uses seasonally adjusted data for regular state UI, which is distorted right now because of the way the Department of Labor (DOL) does seasonal adjustments."

Long ago US economic numbers were more accurately reported. That changed in the neoliberal 90s.

The formula for calculating unemployment, inflation, and other data were and remain rigged to aid markets.

Social Security is an insurance plan — paid for by company and worker payroll tax deductions.

When individuals buy private insurance, it pays holders according to what policies stipulate, no back-ended means testing applied to reduce them.

That was how Social Security was originally established. Bipartisan supported neoliberal harshness changed the rules of the game, harming countless millions of Americans — workers, the working-age unemployed and retirees.

Congress is debating by how much to extend vitally needed benefits to the nation's unemployed and others without a source of income or enough to get by.

Failure to fully extend them for as long as economic crisis conditions continue will amount to "cruel and unusual punishments" that's prohibited by the 8th Amendment.

These vital "benefits are supporting a huge amount of spending by people who would otherwise have to cut back dramatically," EPI explained, adding:

"That spending is supporting more than 5 million jobs. If Congress kills the $600, they kill those jobs."

If the amount is reduced to a much lower figure, what Republicans want, numbers of eliminated jobs will be "kill(ed)" proportionately.

"Concerns about the work disincentive simply ignore the realities of the labor market for working people, who will be very unlikely to turn down a job for a temporary boost in benefits—particularly when it is now clear that jobs are going to be scarce for a very long time."

With millions fewer jobs than workers wanting them, millions of working-age Americans will remain jobless whatever Congress and the White House do or don't do.

Depriving them of enough income for essentials to life and welfare will amount to a crime against humanity.

It'll also be a racist action, people of color in the US most affected by economic collapse, most in need of aid only government can provide.

EPI stressed that Congress and the White House need to act "immediately."

If current benefits expire and are later reinstated in part or in whole, it'll create an unacceptable "administrative nightmare for state agencies, and recipients."

They'll be "a lapse in benefits (of) several weeks in most states" — millions of needly Americans with little or no savings without income to get by.

As of July 18, over 34 million unemployed US workers have either been receiving UI benefits or applied to receive what hasn't been approved so far.

According to financial services company Jefferies, nearly 25% of small businesses closed — either filing for bankruptcy or unable to operate in the current environment.

Most disturbing is that many closed down permanently, millions of jobs irreversibly lost.

Hard times are likely to be longterm for tens of millions of ordinary Americans, especially people of color — the nation's permanent underclass increasing exponentially.

Dems and Republicans are far apart on extending benefits to the unemployed and otherwise needy.

Whatever is agreed on is likely to be much less than recipients are now getting.

Less income means less spending and greater economic harm at a time when Congress and the White House should be focused on stimulating economic recovery by jobs creation programs, along with aid to needy Americans for as long as dire conditions continue.

Instead they prioritize handouts to Wall Street and other corporate favorites while dickering over how much less to do for the nation's most disadvantaged.

Current economic conditions are the most dire in US history for the vast majority of Americans.

Nothing is being done to turn things around economically — notably no jobs creation programs, what's vitally needed.

The hardest of hard times in US history are likely to be protracted — Depression conditions for countless millions that far exceed any other time in the nation's history.

America today is a let 'em eat cake society, serving wealth and power interests exclusively at the expense of most others.

Hard times keep getting harder, the new normal in the United States of I Don't Care, its ruling class indifferent toward human health and welfare.