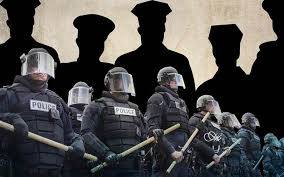 ACLU Sues to Stop State-Sponsored Violence, Chicago to be Occupied by Federal Agents

The nation I grew up in no longer exists, replaced by endless state-sponsored war on humanity at home and abroad — along with the transformation of America to resemble tinpot dictatorships.

Full-blown tyranny may be one more major state-sponsored homeland false flag incidents away that could come any time in a nation where the rule of law long ago died.

On Wednesday, the ACLU and volunteer medics sued the Trump regime's DHS, the US Marshals Service, and Portland, OR police, saying:

A plaintiff in the suit Savannah Guest called what's gone on "terrifying…federal agents show(ing) no humanity or concern."

According to the ACLU, its "lawsuit argues that the law enforcement attacks on medics violates the First and Fourth Amendments."

"The ACLU of Oregon will also seek a court order, prohibiting law enforcement from targeting and attacking medics again."

A statement by ACLU interim director in Oregon Jann Carson said the following:

"Volunteer medics should be celebrated, not attacked or arrested."

"Our clients are volunteering day and night to provide aid to the injured and to create a safer environment for protesters and bystanders."

"These attacks are unconscionable as well as unconstitutional. This lawlessness must end."

A weeks earlier ACLU lawsuit against the Trump regime and Portland police won a court order that prohibits attacks by federal and local law enforcement authorities on journalists and legal observers.

They continue in breach of the Constitution and court order.

"The Trump (regime) and Portland Police Bureau…violated the constitutional rights of our clients to protest and lend medical services, supplies, and treatment to protesters," adding:

"Our clients have been tear gassed, pepper sprayed, beaten, and shot with rubber bullets, even while administering care to injured protesters."

"This lawsuit seeks to ensure that the Trump (regime) and Portland police will be held accountable for their violent, lawless, and unconstitutional actions."

"When protest medics are rendering aid to protest attendees and innocent bystanders, they are exercising their right to free speech."

"At the core of their message: Police violence and brutality will not deter protesters from using their voice to demand change in policing practices."

"For as long as the protests continue, our clients intend to continue exercising their right to deliver that message."

The new ACLU lawsuit seeks a court-ordered halt to violence by federal and local authorities, along with damages for injuries sustained by plaintiffs.

Federal, state, and local authorities are legally mandated to protect Americans from violence committed against them, along with arresting and detaining responsible parties.

Attacking peaceful protesters, journalists, volunteer medics, legal observers, and bystanders breaking no laws/threatening no one, that's what state-terrorism is all about.

That's what has been going on in Portland, federal and local authorities crossing the line from legally permitted law enforcement to state-sponsored violence.

Is much of the same coming to my home city of Chicago? Will I be living under hostile occupation when they arrive?

Will I be endangered on streets near my residence?

According to the Chicago Sun Times, around 200 (paramilitary) federal agents are coming to the city as part of the Trump regime's so-called Operation Legend.

Will they be heavily armed, masked, and attired in unrecognizable uniforms, cruising city neighborhoods in unmarked vans?

Will they operate as extrajudicially in Chicago as in Portland?

Will they transform my neighborhood into a battleground?

According to US attorney, former federal prosecutor John Lausch, federal agents will work with Chicago police and city hall.

Trump "has been on a campaign now for some time against (Dem) mayors across the country."

He's "trying to divert attention from his failed leadership on COVID-19."

Asked about Lightfoot's remarks, Trump invented his own reality, saying "cities…that are in trouble are all run by (Dems)."

"You have radical-left (Dems) running cities like Chicago and so many others (sic)" — claiming he can solve their "problem(s) (sic)."

Lausch said newly deployed federal agents in Chicago will work with "current FBI, ATF, DEA and Homeland Security teams that are already working in Chicago with the Chicago Police Department and the other local and state law enforcement."

He also claimed their involvement in the city won't resemble what's going on in Portland, adding:

"This is working with the Chicago Police Department to do what we can to reduce the staggering violent crime we're facing right now…(focusing on) gangs, guns and drugs."

According to acting DHS secretary Chad Wolf, (i)n Chicago, the mission is to protect the public from violent crime on the streets."

It remains to be seen what happens after elements Mayor Lightfoot objected to having in the city show up.

The longer they stay, their numbers perhaps increasing, the greater the chance of things getting out of hand — including ordinary people threatening no one being harmed by the long arm of state-sponsored brutality.

The late Gore Vidal once mocked GW Bush for calling himself "a wartime president," responsible for high crimes of war and against humanity at home and abroad throughout most of his time in office.

Trump calls himself a "law and order" president. The ACLU accused him of "terrorizing our communities and endangering lives."

These elements in the city "will not be a constructive force…"

They're likely to "terrorize" neighborhoods "and create chaos."

"This is not law and order. This is an assault on…people…and the specific protections of protest and press in the First Amendment."

I'm personally uneasy about federal shock troops in my city, maybe in my neighborhood, likely to do more harm than good.

I'll exhale when they're gone.