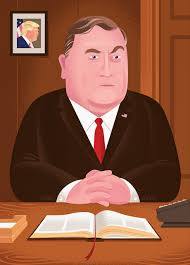 His public addresses are exercises in malicious wars of words on nations unwilling to bend to Washington's will at the expense of their sovereign rights.

Last week, he unloaded venom on China like he's done many times before, his remarks riddled with belligerent Big Lies.

He lied accusing Chinese President Xi Jinping of being "unilaterally aggressive (sic)" — what's been longstanding US policy throughout the post-WW II period and earlier, including against ordinary Americans that are exploited, not served.

Engineered by its dark forces, the new mother of all false flags surpassed 9/11 — the most diabolical state-sponsored high crime to that time because of war on humanity that followed.

The scourge of US bio and economic war on humanity continues with likely far greater harm to countless millions ahead perhaps for years to come.

The human toll of severe illnesses that result from coronavirus infections, deaths, protracted unemployment and impoverishment in the USA alone will likely surpass anything that occurred before in its history — plus a similar toll on countless millions worldwide.

He defied reality, claiming the Trump regime "wants fairness and reciprocity and security for the American people (sic)" — polar opposite its diabolical aims, exploiting ordinary people everywhere so privileged ones can benefit.

What Pompeo calls "the rule of law" interferes with US hegemonic aims so it's consistently ignored — along with US constitutional law and its own statute laws.

What he calls "the Wuhan (corona)virus" was made in a US  biolab — exported to China, Russia, Iran, and elsewhere worldwide.

Spread nationwide in the US, it's all about facilitating the greatest ever wealth transfer from ordinary people to privileged ones — along with bankrupting endless thousands of small, medium-sized, and some larger firms so favored ones can gain greater market dominance by eliminating competition.

Without explanation, Pompeo threatened to "push back against (China) to preserve American national security (sic)."

Does he have WW III in mind with thermonukes able to end life on earth with enough detonations?

Like other far-right members of the US ruling class, Pompeo is psychopathologically challenged with delusions of grandeur.

Part of Washington's criminal class, he and likeminded lunatics infesting the seat of power pose an unprecedented threat to everyone everywhere.

He's a menace to peace-loving people everywhere — drunk with power and craving insatiable amounts more, no matter the human cost he's indifferent about.

He has 2024 presidential ambitions in mind. The possibility of him as commander-in-chief with his finger on the nuclear trigger should terrify everyone.

Earlier he expressed openness to "something (that) will change (his) path in life" ahead.

Since the 1980s, each new US regime exceeded the worst of earlier ones — notably by waging endless wars on humanity at home and abroad.

He never met a nation not controlled by the US he didn't want smashed.

His hostile remarks expose the measure of the man — a repulsive figure to be reviled and opposed no matter what power-grabbing avenues he pursues ahead.