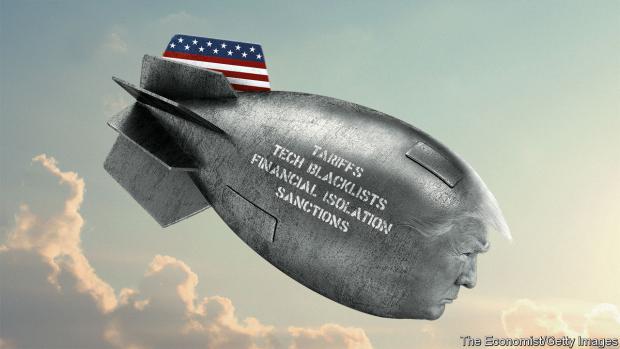 US and UK Sanctions: Weapons of War by Other Means on Targeted Nations and Individuals

Time and again, ruling authorities of both countries accuse other nations for their own high crimes — notably relating to wars of aggression they wage against nonbelligerent states threatening no one, along with their longstanding human rights abuses internally and abroad.

Cold War politics is back with a vengeance on multiple fronts.

It never went away but today it's at a fever pitch — China, Russia, and Iran the prime targets.

Other nations are also targeted for non-submissiveness to unacceptable hegemonic US demands.

On issues of war and peace, the rule of law, and human rights abuses, the US far and away is the main offender, Britain a junior partner in its imperial project.

The politically motivated US 2012 Magnitsky Act targets Russian officials to the present day for the death of Sergey Magnitsky no evidence proves they had anything to do with.

It calls for imposition of visa bans, asset freezes, and other sanctions on Russian nationals accused of committing human rights abuses — no corroborating evidence needed, US high crimes on a global scale ignored.

"We regret that (the Obama regime's) declar(ation) (of) its commitment to the development of stable and constructive bilateral relations was unable to defend its stated position against those who look to the past and see our country not as a partner, but rather an opponent – fully in line with the canons of the Cold War."

"I don't understand why Russian-US relations should be sacrificed for some domestic political gain."

"The (Obama regime's) stance is to ignore crimes against Russian orphans adopted by US parents and not to punish the criminals."

"Russian observers are not even allowed to attend such trials, and I find this unacceptable."

The measure was and remains one of many ways the US wages war on Russia by other means — why diplomatic outreach by its officials most often accomplishes little or nothing.

Magnitsky was a Russian attorney. In 2009, he died in police custody, his death drawing international media attention.

On issues relating to courts, taxes, fines, and civil law, he was considered the "go to guy" in Moscow.

In November 2008, he was arrested, imprisoned, and mistreated — for 11 months denied family visits.

On November 16, 2009, he died for reasons attributed to a "rupture to the abdominal membrane" and subsequent heart attack.

An official investigation undertaken in July 2011 ruled that Magnitsky died from medical neglect.

His mistreatment, leading to death, at the hands of prison officials was no just cause to punish Russian ruling authorities.

This action and countless others like it risk rupturing bilateral relations or potentially something worse between the world's dominant nuclear powers.

US war by hot and other means rages against all nations it doesn't control, world peace and the rule of law ignored in pursuit of its imperial aims.

"(T)he UK has no sovereignty, jurisdiction or right of supervision over Hong Kong."

Nor does the US or any other country. Liu's remarks were over unjustifiable US-led criticism of Beijing's new national security law.

Why the unjustifiable act was resurrected by the Boris Johnson regime to continue Britain's war on Russia by other means was left unexplained.

Rabb defied reality, reinventing Britain as "a global force for good (sic)…commit(ted) to the rules-based international system and to standing up for victims of human rights violations and abuses around the world (sic)."

Ignored were longstanding UK high crimes of war, against humanity, genocide, and other human rights abuses in one country after another in partnership with Washington's imperial project.

Sanctions imposed on officials of Russia and other targeted nations have no validity under international law.

The same holds for all unilaterally imposed sanctions by one nation on others.

Rabb's announced sanctions marked the first time Britain took this action on its own, separate from other European nations — imposing financial asset freezes and banning entry of targeted individuals into the UK, as well as forbidding their involvement in business dealings in the country.

Earlier they were sanctioned by the US for alleged involvement in Magnitsky's death, part of longstanding US war on Russia by other means.

Sanctions on targeted "individuals and organizations are the first wave of designations under the new regime, with further sanctions expected in the coming months."

Ordered by crown prince/de facto ruler Mohammad Bin Salman, he was not among named individuals targeted.

"This sanctions regime marks the beginning of a new era for UK sanctions policy and cooperation between our two democracies (sic)," adding:

"The United States will continue to seek out additional allies and partners to jointly leverage all tools at our disposal to deny access to the US and international financial systems to all those who engage in serious human rights abuses (sic)."

Omitted from the US/UK sanctions list are the world's most grievous human rights abusers — namely themselves, Israel, and other key imperial allies that are complicit in the highest of high crimes.

Russia justifiably considers Magnitsky legislation and similar US actions a breach of its obligations under international law.

No nations may legally interfere in the internal affairs of others.

Acting this way is longstanding US policy, wars by hot and other means its favored strategies.