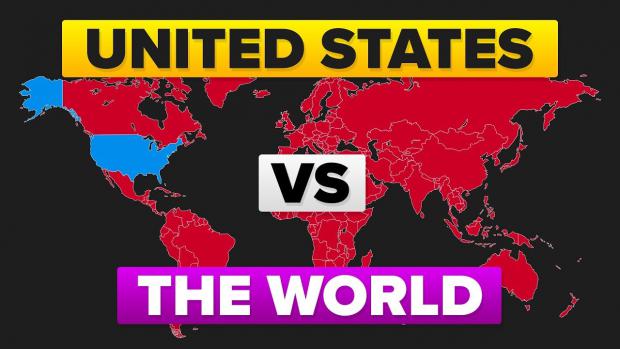 No matter which right wing of the US war party controls the White and/or Congress, its war on humanity by hot and/or other means persists and escalates over time — its super-weapons able to end life on earth if used in enough numbers.

Its aim is all about controlling other nations, their resources and populations — brute force its strategy when other tactics fail.

Notably since the 1980s, each US ruling regime and Congress exceeded the worst excesses of their predecessors.

If presumptive Dem nominee Biden succeeds Trump in January — what's likely based on poll numbers and establishment Republicans opposed to a second DJT term — things in the US and worldwide are likely to be worse than already for ordinary Americans and most others abroad because of its hostile actions.

That's what the scourge of imperialism is all about.

It's worsened by combining it with neoliberal harshness and manufactured economic collapse that imposed unprecedented hardships on ordinary Americans — including higher than ever unemployment, much of it likely to remain longterm.

For millions of abandoned Americans, things may never be the same.

Notably for most of US history, new generations were better off than earlier ones — no longer.

In recent decades, they've been worse off — worst of all by far since engineered coronavirus and economic collapse arrived early this year.

There's no end of it in prospect ahead, maybe never in our lifetimes for most people.

Things are more likely to worsen ahead than improve — to benefit the nation's ruling class exclusively by exploiting and immiserating most others at home and abroad.

Nothing throughout most of my lifetime approaches what's gone on since neoliberalism became official US policy under the Clinton co-presidency.

Things worsened exponentially post-9/11, the mother of all state-sponsored false flags to that time, surpassed by another outdoing it — US state-sponsored pandemic and economic collapse.

There's nothing natural about either manufactured event, planned by US dark forces long before unleashing them on humanity.

They created the most dismal and worrisome state of affairs in US history — threatening everyone at home and abroad so a privileged few can benefit at the expense of the vast majority worldwide.

That's the ugly state of America today, a frightening situation at a time of endless wars and no prospect for better times ahead for the vast majority of the nation's people.

Opportunities abounded for ordinary youths like myself when I entered the workforce 60 years ago.

Today they're gone at a time when around one-third of the US population is unemployed — the true number based on how calculated pre-1990.

Most others with jobs have rotten ones, paying poverty or sub-poverty wages with few or no benefits.

When I began my formal working life, I had no trouble beginning it straightaway after graduation — taking one day off, then reporting on the job.

Total cost today for all of the above in the current academic year at my alma mater is around $70,000 — thousands more for books, other personal expenses, and travel costs for out-of-town students.

Without significant financial help, higher education at my alma mater and many other US institutions of higher learning is unaffordable for most students seeking it.

Worse still, unaffordability comes at a time when job opportunities that abounded in my youth are largely gone.

The nation I knew growing up no longer exists. Not beautiful then, today the US is unsafe and unfit to live in from sea to shinning sea — and elsewhere at risk of being targeted for regime change to further its hegemonic aims.

A notion unthinkable for youths like myself is today's reality.

On the 244th anniversary of America's independence from Britain, most everything remaining the same at the time under new management, the US transformed itself from that earlier era to a machine for the manufacture high crimes of war, against humanity, and genocide against targeted people worldwide, including domestically.

Instead of operating as a role model for governance the way it should be, its plutocratic autocracy heading toward full-blown tyranny is polar opposite what governance of, by, and for everyone equitably is all about.

It's symptomatic of a nation in decline. The more egregious US actions become, the further along it moves toward its own demise as a world power.

Its imperial rage and contempt for ordinary people everywhere transformed itself into its own worst enemy, along with becoming a widely despised pariah state.

Its engineered pandemic and economic collapse, causing untold harm to most people at home and abroad is the latest example of an out-of-control nation that's done more harm to more people over a longer duration than the worst of earlier imperial powers.

Humanity's survival may depend on whether imperial USA ends up in history's dustbin before its rage consumes us all.