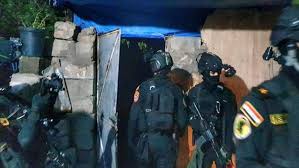 According to Reuters, at least three of the group's commanders and one Iranian were arrested, then handed over to the Pentagon, the report denied by a US military spokesman, wanting the Trump regime distanced from what happened.

Heavy involved in combatting US-supported ISIS, they oppose Pentagon troops occupying Iraqi territory, wanting them ordered out of the country.

Likely pressured by the Pentagon, the raid was ordered by new Iraqi Prime Minister Mustafa al-Kadhimi, earlier pledging to be tough on anti-US PMU fighters, why they strongly opposed his appointment.

The arrests followed an earlier rocket attack on Baghdad's Green Zone that targeted the US embassy.

Reportedly, both Tehran and Washington supported Kadhimi becoming prime minister in May.

After Saddam Hussein was toppled and executed in 2003, the Pentagon established and trained Iraqi counter-terrorism fighters to serve US interests in the country.

The fate of arrested PMU fighters is unclear. US officials accused the group of attacking its diplomatic and military facilities in Iraq.

Weeks earlier, they were blamed for attacking US targets in Baghdad.

Months earlier, they reportedly struck a Pentagon base near Kirkuk in northern Iraq.

They were also blamed for attacking the Pentagon's Camp Taji, killing one UK and two US soldiers.

Arrests of PMU fighters will likely heighten tensions more than already in the country unless they're promptly released.

Unlikely at least any time soon, taking this step would weaken Kadhimi for walking back on his pledge to get tough on anti-US occupation PMU fighters.

According to former UN head of communications in Iraq Yasmin Amin-Zaki, arresting PMU fighters showed Kadhimi's intention to use the power of his office to exercise control.

Doing it in service to Washington would make him an enemy of the state.

Iraq is occupied US territory, the vast majority of Iraqis hostile to the presence of its military.

The Pentagon uses bases in the country as platorms for regional wars, notably against Syria, against the Iraqi people as well by occupying their country.

For the US, Kadhimi supports the presence of Pentagon forces in Iraq on the pretext of combatting ISIS remnants in parts of the country who are backed by Washington.

PMU commanders could retaliate against Kadhimi and US forces for seizing their fighters.

Iraqis won't ever be free until the presence of hostile US troops ends.

Made in the USA COVID-19 Outbreaks Rising Exponentially