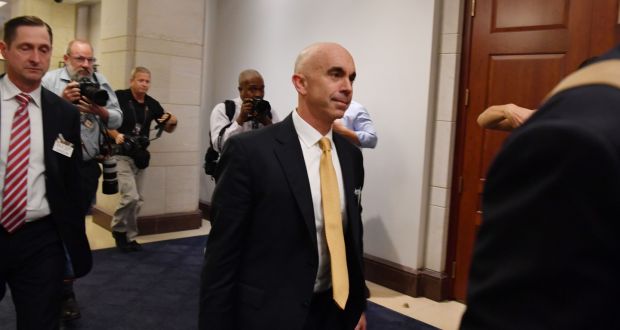 Trump Sacks Another Regime Official, a Policy of Purging Critics

A White House statement said Pompeo "recommended the move" — to quash an inquiry into his management of the department not explained.

Pompeo has 2024 presidential ambitions. He wants no potential dirty linen airing that could harm his chance to become a future GOP standard bearer.

The possibility should terrify everyone. His extremism makes Trump almost look mild by comparison.

According to Politico, Pompeo's policies at State above all are "designed to bolster his…standing with the GOP base."

Linick began investigating improper actions by him and his wife.

In response to his sacking, House Dems indicated they'll open their own investigation into the issue.

By letter to the White House and State Department, they requested documents related to Linick's sacking.

According to the US Hatch Act (1939), executive branch officials are prohibited from engaging in certain forms of political activity — the president, vice president, and designated members of their staff excluded.

In February, he addressed the Conservative Political Action Conference, a must venue for Republicans with presidential aspirations.

Like Mike Pence, Pompeo is an evangelical Christian. Time and again, both figures unacceptably cross the line between church and state by their rhetoric and actions.

Appointed State Department inspector general by Obama in 2013, Linick's justifiable criticism of Hillary's use of her private server for Foggy Bottom business aroused the ire of Dems.

In 2019, he criticized mistreatment of State Department staffers under Pompeo and his subordinates.

By letter to congressional leaders, Trump failed to state reasons for sacking Linick, saying only that he "no longer (has the) fullest confidence" in the inspector general.

He was involved in impeaching Trump by House Dems — by providing them with documents, not by testifying.

Other officials involved in the process were sacked by Trump.

Separately in early May, Trump nominated a replacement for HHS deputy inspector general Christi Grimm in response to her criticism of his mishandled COVID-19 outbreak response.

The surest way to be sacked by him is to serve the public interest responsibly over political interests.

He formerly served as Indiana Economic Development Corporation chief of staff when Pence was governor.

According to the State Department, the office of inspector general is a nonpartisan position involved in "determin(ing) whether policy goals are being achieved and whether the interests of the United States are being represented and advanced effectively."

The office is also mandated to investigate "instances of fraud, waste, and mismanagement that may constitute either criminal wrongdoing or violation of Department and USAGM (US Agency for Global Media) regulations."

A politicized House Dem probe into Linick's sacking will be conducted in the coming weeks.

It's at a time when both wings of the one-party state should focus like a laser on improving public health, reviving the economy, and aiding growing millions of unemployed and underemployed Americans in need.

He urged a new convention every 20 years to fix problems and make the Constitution relevant to the times.

Most important is obeying the core law of the land, its statutes, and international law — clearly not how its ruling authorities and lawmakers operate.

America's deplorable state reflects Benjamin Franklin's warning about "(a newly formed) republic, if you can keep it."

He understood significant challenges ahead, likely never imagining how bad things would get.

The nation is on a slippery slope toward full-blown tyranny — compounded by its forever wars, at the expense of vital homeland needs gone begging.

It's why the hardest of hard times in US history are unfolding in real time — a protracted public health crisis compounded by economic collapse, a perfect storm.

There's a war going on by the nation's ruling class against the vast majority of the people.

The extent of human pain and suffering will best be understood in the fullness of time.

No matter which right wing of the one-party state runs things, the nation's privileged class benefits exclusively by exploiting most others at home and abroad.

That's the disturbing truth about the dismal state of the nation with no prospect for relief ahead for the vast majority of Americans.