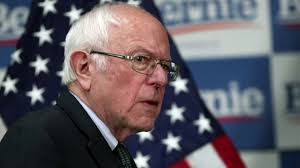 When revolutionary change is most needed, it's nowhere to be found in the US land of the free and home of the brave in name only — a fantasy democracy, never the real thing, so-called elections part of the charade.

Sanders pretended to be a serious presidential contender in 2016 and in the current race to become Dem nominee.

It was Hillary's turn to pursue the brass ring twice before. Now it's Biden's time, both rock solid establishment figures — their anointment as party standard bearers pre-determined by party bosses. Voters have no say whatever.

That's how the US system works. If elections produced positive change, especially when most needed like now, they'd be banned.

Throughout his House and Senate tenure in Congress since 1991, Sanders' voting record belied his public advocacy, largely along Dem party lines.

Like the vast majority of others in Congress, past and present, his soul was and remains for sale at the right price.

He fools many people some of the time, his supporters most always.

A progressive socialist in name only, he's never been the real thing throughout his public life, including as Burlington, VT mayor in the 1980s.

"I have concluded that this battle for the (Dem) nomination will not be successful. So today I'm announcing the suspension of my campaign."

"I could not in good conscience continue to mount a campaign that cannot not win and which would interfere with the important work required by all of us in this difficult hour."

"Today I congratulate Joe Biden, a very decent man (sic) who I will work with to move our progressive ideas forward."

A formal endorsement of Biden will follow. It'll likely be similar to his announced support for Hillary in 2016, saying at the time:

"I am endorsing Hillary Clinton…(S)he must become our next president."

She "understands that we must fix an economy in America that is rigged and that sends almost all new wealth and income to the top one percent."

Hillary and Biden are two unacceptable sides of the same coin — pro-war, pro-business, anti-government of, by, and for everyone equitably.

In 2016, Sanders falsely added that that the Dem party platform was "the most progressive in the history of the (Dem) party (sic)."

Dem New Deal, Fair Deal, and Great Society programs are a shadow of their former forms, regressive, not progressive — social justice in the US targeted for elimination by both right wings of the one-party state, notably since the neoliberal 90s.

When most needed at a time of growing mass unemployment, human misery, and public angst, compounded by a public health crisis, progressive rule in America is more urgently needed than any time since the 1930s decade-long Great Depression.

Franklin Roosevelt led the nation at the time. Today it's Trump, an anti-populist serving privileged interests exclusively at the expense of ordinary Americans he's dismissive toward.

FDR and Congress established an alphabet soup of progressive policies — designed to help Americans in need and revive the economy. They included:

The Blaine Act that repealed Prohibition, a failed experiment.

Something similar today is vitally needed to end the war on drugs that's largely a war on Blacks, Latinos, and the poor that created the humanly destructive US prison/industrial complex, the world's largest by far.

The Works Progress Administration (WPA) to provide emergency relief for the unemployed.

The Farm Credit Act to help farmers refinance mortgages at below-market rates so they could stay solvent.

The National Labor Relations (Wagner) Act that let labor bargain collectively on equal terms with management for the first time in US history — its benefits largely gone today.

The landmark Social Security Act — the single most program ever enacted for ordinary Americans along with Medicare in the 1960s for seniors and others who qualify.

The Revenue Acts of 1934, 35, and 36 established tax rates for high-income households and corporations to pay their fair share.

The Revenue Act of 1937 aimed to curb tax evasion.

The Railroad Retirement System, separate from Social Security, administered a social insurance program for railroad workers and their families.

The National Youth Administration (NYA) provided grants to high school and college students in return for work, along with on-the-job training.

The Securities and Exchange Act enforced securities laws and the industry. The aim fell far short of fulfillment.

The Bank Act (Glass-Steagall) created the FDIC, insured bank deposits up to $5,000, and separated commercial from investment banks and insurance companies, among other provisions to curb speculation.

Along with the Commodity Futures Modernization Act (CFMA) around the same time, a Pandora's Box of unregulated Wall Street excesses became the new normal that contributes to creating artificial booms and busts like what's unfolding now.

While New Deal initiatives didn't end the Great Depression because greater spending was needed, they provided important financial and other support at a time when only government had the resources to help millions of people in dire need.

Based on his record in Congress since the 1970s, Biden is like Trump with a rhetorical difference.

While a Sanders presidency would surely fall short of his lofty rhetoric, instead of dropping out of the race at a time of unprecedented economic duress for ordinary people, he should have stepped up his campaign and stayed the course.

Like the 1930s, now is the time for leadership that's dedicated to helping ordinary Americans in need with a current-day alphabet soup of progressive policies when most needed.

Trump or Biden are neanderthal politicians whose records show indifference toward public need in deference to privileged interests they support exclusively.

A progressive giant is needed to guide the US through unprecedented troubled waters.

Sadly, there's no one in the race for the White House that remotely meets this standard.