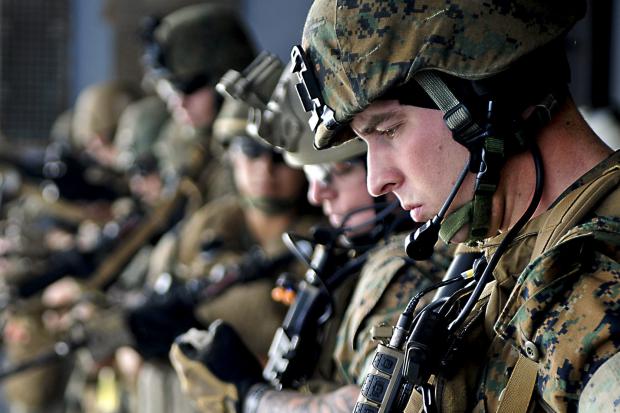 On Monday, the Pentagon admitted that over 1,000 US military personnel are infected with COVID-19 — how much over not explained.

On the same day, it ordered commanders on all US bases worldwide to stop revealing numbers of infected personnel on their installations, including ships at sea and in ports.

If the secretive Pentagon admitted to a thousand COVID-19 cases, the number is likely much higher, growing exponentially for military personnel living and operating in close quarters.

At the height of Spanish Flu infections in 1918 during WW I's final year, up to 40% of US army and navy personnel were ill from influenza and pneumonia — causing more deaths than trench warfare and other combat.

Thousands of troops aboard transport ships to and from France died.

During battlefield operations, commanders prioritize their assigned mission. The health and welfare of military personnel can get short shrift.

If numbers of troops become sick from a contagious disease, it can spread like wildfire to others because they're in close proximity to comrades in arms.

Texas is home to 15 US military bases, mostly around Corpus Christi and San Antonio.

The latter's Mayor Ron Nirenberg criticized non-reporting of COVID-19 outbreaks, saying "the public has a right to know," adding:

"The lack of information is complicating a coordinated pandemic response at the state and federal level."

"One of the biggest battles that we have is helping people understand the seriousness of the situation."

According to the NYT, Navy Times, and other media reports, over 100 US military personnel aboard the aircraft carrier Theodore Roosevelt are infected with COVID-19.

The warship's crew numbers over  4,000, most members working, eating, and sleeping in close proximity to each other, leaving them vulnerable to contagion.

The San Francisco Chronicle broke the story on Tuesday after obtaining a copy of Crozier's letter, saying:

Capt. Brett Crozier wrote to Pentagon directly because of the threat of rapidly spreading infections.

He explained that outbreaks occurred in less than a week, urgently asking for help because the ship has limited quarantine capacity, adding:

"This will require a political solution…We are not at war. Sailors do not need to die. If we do not act now, we are failing to properly take care of our most trusted asset — our Sailors."

"Due to a warship's inherent limitations of space," quarantining is limited. "The spread of the disease is ongoing and accelerating."

"Removing the majority of personnel from a deployed US nuclear aircraft carrier and isolating them for two weeks may seem like an extraordinary measure."

"Keeping over 4,000 young men and women on board the TR is an unnecessary risk and breaks faith with those Sailors entrusted to our care."

"Due to the close quarters required on a warship and the current number of positive cases, every single Sailor, regardless of rank, on board the TR must be considered 'close contact.' "

"Decisive action is required now in order to…prevent tragic outcomes. (O)ur focus now must be on quarantine and isolation."

Asked about the issue on Tuesday, Trump dismissively said "let the military make that decision."

I don't think we're at that point," he said, adding:

"We're moving a lot of supplies and assistance, medical assistance, out to the carrier in Guam. We're providing additional medical personnel as they need it."

In other words, most crew members are likely inadequately treated or getting none at all.

According to chief of naval operations Admiral Mike Gilday, the navy is taking "this threat very seriously," adding:

"We are confident that our aggressive response will keep USS Theodore Roosevelt able to respond to any crisis in the region."

None occurred since WW II ended other than US invented ones.

Acting navy secretary Thomas Modly said "I know that our command organization has been aware of this for about 24 hours, and we have been working actually the last seven days to move those sailors off the ship and get them into accommodations in Guam."

"The problem is that Guam doesn't have enough beds right now and we're having to talk to the government there to see if we can get some hotel space, create tent-type facilities."

According to former former NATO supreme allied commander Europe, retired Admiral James Stavridis, "we should expect more such incidents because warships are a perfect breeding ground for coronavirus."

If most or all crew members remain onboard, they're all vulnerable to infection, rendering the vessel non-battle ready.

Given the contagiousness of the virus, the number of infected crew members is likely much higher by now.

The same is likely the case on most or all US bases and ships where large numbers of military personnel are in close contact with each other, social distancing not possible.

The same likelihood applies to military forces of other countries.

Most worrisome is how fast outbreaks are spreading among members of the US general public and medical staff on the front lines of treating infected and other patients.

Even more worrisome is the failure of the Trump regime and Congress to act responsibly straightaway when outbreaks began and epidemiologists and other medical experts sounded the alarm about the risk of them spreading rapidly.

Containment, testing, and treating the sick should be prioritized above all else at the federal, state and local levels.

The US is the only developed country without some form of universal healthcare.

Millions of laid off workers without pay or company health insurance when provided will be hard-pressed to put food on the table and pay rent or service mortgages if the current crisis continues for months.

If become ill, they may skip treatment because of affordability and try to tough it out on their own.

Communities with large numbers of infected individuals are breeding grounds for spreading disease to others — even if individuals hunker down and only go out to buy food and essentials.

If the Trump regime responded to outbreaks like China's imposition of draconian measures in Wuhan, rapidly rising outbreaks in the US might not be happening.

Instead, contagion is spreading through many communities nationwide at an alarming rate.

The more infected people in a nation with a large population like the US and no universal healthcare, the greater the likelihood that millions could be affected and hundreds of thousands could die needlessly.