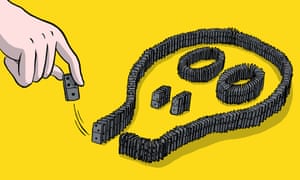 No nation in world history did more harm to more people over a longer duration than the US.

None more gravely threatens humanity's survival today because of its rage to control planet earth, its resources and populations.

Is COVID-19 a US geopolitical/socio-economic experiment gone awry, or is it working as planned?

According to Dr. F. Perry Wilson:

"Think of COVID-19 as a fire burning in a forest. All of us are trees. The R0 (infection spread rate) is the wind speed. The higher it is, the faster the fire tears through the forest."

If an infectious disease has an R0 of 2, it means an infected person will transmit it to two others on average.

Shelter in place, social distancing, and lockdowns keep COVID-19 fires from setting the forest ablaze — whatever the R0.

The greater it is, the more important these draconian measures become.

Because individuals infected with COVID-19 can have symptoms or be asymptomatic, it's hard gauging the true R0.

According to Wilson, "(t)he observed R0 is 2.5, enough to lead to widespread infection(s)."

The true R0 could be much higher because of asymptomatic individuals with the disease, others with mild symptoms not seeking or receiving medical help, and an X factor.

According to a scientific expert remaining anonymous, fearing possible reprisal for diverging from the official narrative, people are being "test(ed) for any strain of coronavirus (because) (there are) no reliable tests for a specific COVID-19 virus."

Gauging the true number of infected persons is at least partly guesswork. Is the actual number higher or lower?

Millions of Americans and others elsewhere contract seasonal flu. Its symptoms are similar to most coronavirus strains. Are individuals with suspected COVID-19 symptoms being accurately diagnosed?

Severe cases of the disease with acute respiratory problems are a small percentage of the total number of infected individuals.

Because of America's large population (about 330 million people), Dr. Wilson believes large numbers of Americans will be infected without "extensive distancing measures (wide fire lines)" to contain the blaze from spreading to much greater numbers of people.

So far, the true mortality rate from COVID-19 is unknown. Through Monday, about 189,000 US infections were reported, including 3,890 deaths for a mortality rate of about 2%.

If that's the true rate, it means that 98% of individuals infected with COVID-19 will recover, what's encouraging to know with a caveat.

The elderly, people with weak immune systems, and/or dealing with hypertension, heart disease, and other major health problems are vulnerable to be harmed most by COVID-19.

If 10% of the US population is infected with a 2% death rate, about 658,000 Americans could die before the ongoing blaze is extinguished.

According to Wilson, the true death rate may be much lower than what's observed "because we're not capturing all of those with mild or even asymptomatic illness."

Widespread testing in Iceland with a population of about 365,000 people found up to half the numbers checked were asymptomatic, Wilson explained.

If the same situation applies to the US and elsewhere, it means the death rate is around 1% or lower.

It also means that the true number of infected individuals individuals in the US could be double or more what's reported because of woefully inadequate testing.

The greater the number of infected individuals, the more greatly the disease can spread to others without firewalls in place to contain it.

The Trump regime and vast majority of congressional members are beholden to monied interests they serve exclusively at the expense of public health and welfare.

They were slow to react to COVID-19 outbreaks, an approach polar opposite China that imposed draconian lockdown measures in its Wuhan epicenter to contain the spread of the disease.

It worked. The South China Morning Post reported that controls in the city are easing, people beginning to go back to work.

China is slowly recovering as outbreaks keep rising in the US, Europe and elsewhere.

Beijing did "a great job in containing the epidemic. We reversed the situation in two months."

"The number of infections and deaths in China, a gigantic society with a population of over 1 billion, constitutes an impressive contrast with the figures outside the country."

"China has become a force of support in the global pandemic fight after overcoming its initial predicament."

"It has dispatched medical supplies and experts to other countries, a contribution to the international community that cannot be denied no matter how hard some forces find fault with China."

"China is the first country to have started post-epidemic reconstruction" even though control and containment measures aren't entirely over, and it's unknown whether a second wave of outbreaks could erupt.

Many uncertainties lie ahead so the battle against COVID-19 in the country is unfinished.

Elsewhere things are worsening. In the US, states and cities are bearing the greatest burden because of inadequate federal help.

In hard-hit New York, Governor Cuomo slammed the corporate bailout bill for providing about $3.8 billion to the state, mostly for NYC — compared to an estimated $15 billion in lost revenue so far, according to state budget officials.

A revised update nearly doubled the bailout bill's amount to the state, still leaving a large budget shortfall, virtually sure to increase without further federal aid.

What are the geopolitical implications of spreading COVID-19 outbreaks worldwide?

Over 30 House and Senate members wrote Pompeo and Mnuchin, urging sanctions relief for Iran to contain outbreaks of the virus that respects no borders, stressing:

It "poses (a) serious risk both to human health and life and to regional economic and political stability. These may in turn negatively impact the economic and security interests of the US and our allies."

Instead of easing sanctions, the Trump regime piled on new ones. More war on Iraq may be planned against its Popular Mobilization Units (PMUs) that are connected to the country's military.

They were earlier on the front lines of combatting US-supported ISIS in the country.

It's a key reason why the Trump regime would like them eliminated — on the phony pretext of claiming they're controlled by Iran.

Venezuela remains a prime US target for regime change. It's latest stunt was falsely charging President Maduro and other Bolivarian officials with narco-terrorism — a US specialty in contrast to Venezuela's anti-illicit drug efforts.

Offering a bounty "of up to $15 million dollars for information leading to the arrest and/or conviction of" Maduro is one of countless examples of US depravity and decadence.

While the US wages sanctions war, economic war, financial war, and medical war on Iran, Venezuela, and other countries on its target list for regime change, Cuba sent around 600 doctors and other medical professionals to 14 nations to help them combat COVID-19, according to its public health ministry.

Cuba's main exports are doctors, other medical professionals, teachers and good will — in contrast to mass slaughter, vast destruction, and human misery wherever the US shows up.

President Xi Jinping called medical aid to these and other countries a "Health Silk Road."

Medical outreach by China, Russia, and Cuba contrast sharply with US aims for global dominance by crushing economies and immiserating the people of countries it doesn't control.

It's along with waging forever wars in multiple theaters, waging neoliberal and other forms of repression at home, and doing woefully too little for millions of ordinary Americans in their time of dire need — including virtually no medical help for COVID-19 infected people.

At a time when mutual cooperation among nations worldwide is vitally needed against a common public health threat, the US prioritizes its imperial agenda and deference to its privileged class exclusively over all else.