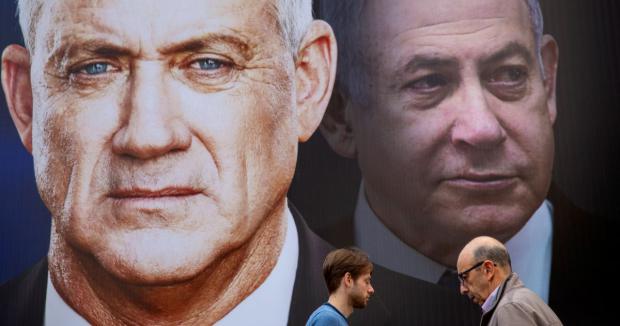 For over 11 months after three elections, leading Israeli parties Likud and Blue and White failed to cobble together a ruling coalition.

Can a fourth election be avoided later this year? Can Gantz or Netanyahu accomplish ahead what's been unattainable for either figure since April last year?

Parties they lead have been unable to form a coalition government without sacrifices potential members rejected before.

On March 17, trial proceedings begin against Netanyahu on charges of bribery, fraud, and breach of trust with damning evidence against him.

Should he be allowed to continue as prime minister with possible conviction and imprisonment for offenses too serious to ignore?

According to Israeli law, it's permitted. Knesset members can change it by a legislative majority. It begs the question why it's been allowed up to now.

Convicted felons have no place in high or any other public office. Netanyahu is the worst in Israeli history, exceeding Sharonian evil, no small achievement.

So far, LGM's Orly Levy-Abekasis opposes the idea, a possible deal breaker if able to get other party members to back her position.

They "agreed to continue their strategic partnership and to continue with efforts to form a government, harnessing all the partners in the political system to prevent Netanyahu and Likud from dragging the country to a fourth election."

Separately, Peretz said "(w)e're  continuing our efforts to form a new government as quickly as possible…led by Gantz" — to oust Netanyahu from power once and for all.

Joint List leader Ayman Odeh said his party members are finalizing terms Blue and White must accept for them to be part of a Gantz-led coalition government.

With further demands to come, they include the following:

"We want dignity and rationality at this state. Our political demands are:

Rejection of any unilateral plan

Al-Aqsa Mosque only for Muslims

East Jerusalem the exclusive capital of a Palestinian state, adding:

It prohibits construction by Palestinians on their own land without near-impossible to get Israeli permission.

It increases a maximum sentence to three years from two years for anyone convicted of building without permit permission almost never gotten.

It lets Israeli authorities impose financial penalties, along with eviction and demolition orders.

So far, he's been unwilling to be part of a ruling coalition that includes Arab members, saying on Wednesday:

His "position has not changed," adding: "We will make decisions according to the national interest and our promises to voters."

Gantz reportedly aims to cobble together a minority government before end of March — if able to get backing from coalition partners he needs, a tall order perhaps more likely to fail than succeed unless they agree to what they never accepted before.

At this time, his plan is the only way to avoid a fourth election later this year, Israel already in uncharted territory.

A coalition comprised of Blue and White's 33 seats with Joint List's 15, LGM's 7 and Lieberman's 7 would give Gantz a 62-seat majority.

Considered a long shot by some, it may be the best way at this time to send Netanyahu packing.

If convicted and imprisoned following upcoming trial proceedings, his public life and personal freedom will reach an ugly end.